Exile Poems: In the Labyrinth of Homesickness 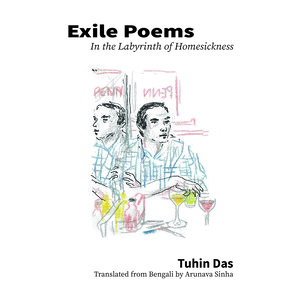 Exile Poems: In the Labyrinth of Homesickness

“In these poems, I have sought the meaning of my unforgotten birthplace of Bangladesh; my new life in an American city; my existential crisis, individuality, and loneliness; my displacement, belonging, and new friendships; and my adaptation to a new country and a new language. […] My hope is that readers will discover a heart and mind undefeated by the cruelty in this world and still thirsty for beauty.” —Tuhin Das

Tuhin Das’s Exile Poems: In the Labyrinth of Homesickness, translated from Bengali by Indian translator Arunava Sinha, comprises sixty-five poems written in Pittsburgh, Pennsylvania, after Das is forced to flee from his home in Barishal, Bangladesh, in 2016. These poems chronicle Das’s innermost thoughts, insuppressible fears, and poignant observations as he considers both places, the one he left behind and the one that offered him sanctuary. Das’s story is one of resilience, meditative self-reflection, and courageous rebellion as he navigates a new life in exile and continues to fight for freedom of expression.

Tuhin is a writer-in-residence at City of Asylum.

TUHIN DAS is a Bengali poet currently living in the U.S. He comes from Barishal, a city in south-central Bangladesh. He was involved in the little magazine movement and has edited several literary magazines. Over the last twenty years, his poetry criticism articles, short stories, and opinion columns have been published in Bangladesh and West Bengal, India. He is the author of eight poetry books in his native language. He is considered by critics to be a significant poet of Generation Zero and began publishing contemporary Bangladeshi literature in 2000. His life has been deeply impacted by groups who limit freedom of expression. Carnegie Mellon University invited him to Pittsburgh, Pennsylvania, as a visiting scholar, and City of Asylum invited him to join their writer sanctuary program as an ICORN writer-in-residence. He left his home country, Bangladesh, in 2016 and was granted asylum in the U.S. in 2021. Das’s work has appeared in Words Without Borders, The Bare Life Review, The Offing, Epiphany, and Immigrant Report. An interview with Das was featured in World Literature Today.