The Muse of Freedom: a Cévenoles Sagas novel (Paperback) 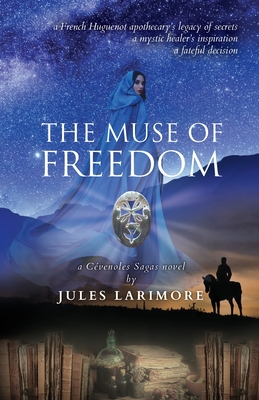 The Muse of Freedom: a Cévenoles Sagas novel (Paperback)

IN THE MYSTERIOUS C VENNES MOUNTAINS OF LANGUEDOC, FRANCE, 1695, Jehan BonDurant, a young nobleman forcibly held in a Dominican prieur as a child, comes of age only to inherit a near-derelict estate and his Huguenot family's dangerous legacy of secrets. While he cherishes his newfound freedom apprenticing as an apothecary, his outrage mounts over religious persecutions led by King Louis XIV's Intendant Basville, who is sent to enforce the King's will for "One King, One Law, One Faith".

The ensuing divisions among families and friends and the gradual revelation of his own circumstances lead Jehan to question his spiritual choices. A journey, deep into the heart of the Cevennes in search of guidance, unfolds in a way he least expects when he enters the enchanting Gorges du Tarn. There, he discovers his muse, Amelia Auvrey, a free-spirited, mystic holy woman who reveals ancient healing practices and spiritual mysteries.

Together they quest for peace and spiritual freedom by aiding the persecuted until the Intendant's spy reports their activities and the King's dragoons are sent out after them. To retain their freedom, they must choose to live in hiding in a remote wilderness, join a festering uprising against the persecutions, or flee their cherished homeland with thousands of other refugees in search of hope.

Inspired by the true story of Jean Pierre Bondurant dit Cougoussac, distilled and blended with C venole magic lore, this is a vividly told coming-of-age adventure and family saga of courage, tenacity, and the power of love.

Fans of Poldark, Magic Lessons, The Lost Apothecary, The Huguenot Chronicles, and The Alchemist will find thematic elements from those stories melded into this thrilling and obscure slice of French history.