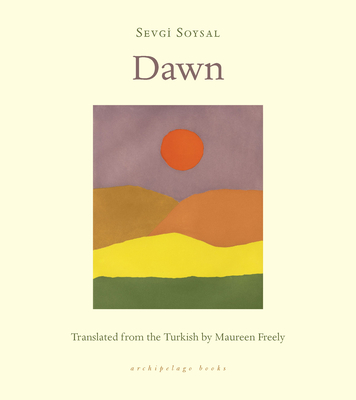 
On Our Shelves Now: We will email when ready for pick up
A searing autobiographical novel about a single night in prison suggests how broken spirits can be mended, and dreams rebuilt through imagination and human kindness

“Like Pamuk’s Snow, Dawn is the Turkish tragedy writ small. In contrast to Snow, it places gender at its heart.”  --Maureen Freely

As night falls in Adana, köftes and cups of cloudy raki are passed to the dinner guests in the home of Ali – a former laborer who gives tight bear hugs, speaks with a southeastern lilt, and radiates the spirit of a child. Among the guests are a journalist named Oya, who has recently been released from prison and is living in exile on charges of leftist sympathizing, and her new acquaintance, Mustafa. A swift kick knocks down the front door and bumbling policemen converge on the guests, carting them off to holding cells, where they’ll be interrogated and tortured throughout the night.

Fear spools into the anxious, claustrophobic thoughts of a return to prison, just after tasting freedom. Bristling snatches of Oya’s time in prison rush back – the wild curses and wilder laughter of inmates, their vicious quarrels and rapturous belly-dancing, or the quiet boon of a cup of tea. Her former inmates created fury and joy out of nothing. Their brimming resilience wills Oya to fight through the night and is fused with every word of this blazing, lucid novel.
Sevgi Soysal was born in Istanbul in 1936. Her work is inspired by her childhood in Ankara, youth and student movements in Turkey, revolutionary dreams, and experiences of leftist intellectuals in prison and in exile. In 1974, Soysal won the prestigious Orhan Kemal Award for Best Novel for Noontime in Yenişehir, which she wrote while in prison. Dawn was published in 1975, a beautiful thematic companion to her memoirs of prison life. She wrote a brilliant set of endearing and illuminating story collections, novels, and memoirs before she died at the age of 40 of cancer in 1976. She left behind an incomplete novel, Welcome, Death!

Widely regarded as the foremost translator of Turkish literature, Maureen Freely was born in the US, raised in Turkey, and educated at Harvard. Her translated works include five works by the Nobel laureate Orhan Pamuk. Sevgi Soysal was the first writer she ever translated.
"That Soysal’s work is often categorized as Turkish coup literature sometimes detracts from the breadth of her literary creativity and unapologetic feminism . . . Dawn is daringly explicit about the tribulations of the female body, from accounts of sexual assault in prison to the shame women feel about menstruation . . . Freely’s translation is clean, colloquial and confident."
--Ayten Tartici, The New York Times

“The fluid shifts in points of view underscore the precariousness of the characters’ lives during a tumultuous and violent period following a recent coup . . . [Dawn] powerfully underscores how the threat of violence drives all the characters into suspicion and paranoia. This story of persecution convinces with its urgency and humanity.”
--Publishers Weekly

"With the unflinching eye of a journalist and the sensitivities of a novelist, Soysal reveals one night of horror threaded with moments of possibility and human connection. Maureen Freely’s translation brings Soysal’s riveting words to a wider audience, one courageous woman’s story, a necessary story for our whole fragile world."
--Patty Dann, author of Mermaids and The Wright Sister

With a clarity and courage rooted in her own experiences as a political prisoner, Sevgi Soysal unflinchingly exposed the suffering and defiance of women in 1970s Turkey, and more broadly the conflicts inherent in personal and political loyalties which continue to resound in our time. A brutal but ultimately rewarding novel, and a timely and typically sensitive translation by Maureen Freely.
--Alev Scott, author of Ottoman Odyssey

"[Soysal's] writings, full of courage, malice, disobedience and irony, do not so much reflect an existing feminist movement on the streets . . . as forge a new voice, inquiring into the power of capital and men, while keeping in mind the tempestuous and fickle nature of human relationships, with their power to subvert, inflame and destroy . . . Defiant, flawed, piercing. Reading . . . Soysal today restores the volatility and violence of female concerns, and expands our horizons of understanding how inequality operates."
--Helen Mackreath, The White Review

"Startling reflections on beauty and freedom are woven throughout [Dawn]. An exciting translation of a feminist novel that renders a nuanced picture of the conflicting ideologies of 1970s Turkey."
--Kirkus Reviews

"Dawn integrates all of Soysal’s signature techniques and preoccupations . . . Maureen Freely skillfully registers the tones of disquiet and grief that empower Soysal’s sentences . . . Ultimately, and without Soysal having to spell it out, it is clear that each individual’s turmoil results from the anguish caused by the unforgiving powers of the state."
--Ron Slate, On the Seawall

"Visceral and cinematic . . . The novel situates the woman’s body in its confrontations with authority. The brilliance of the novel might be traced to the formal structure through which the author reflects on this confrontation . . . Soysal’s writing is captivating, reflective, and thrilling . . . Dawn is a classic that readers interested in feminist world literature will devour."
--Irmak Ertuna Howison, Asymptote

"Soysal does not disguise which side she is on – that of the downtrodden, the workers, the women, those opposed to the military government and its martial law. We see her own story through Oya but also the stories of the others, some enthusiastic opponents of the government and others just trying to make a living, honest or otherwise."
--The Modern Novel

"By Dawn’s end you may well feel you, too, have spent a night in the cells with [Soysal's characters] and developed that accidental comradeship. In one way or another, their lives will have touched you and, whatever hope you have left, you will hope for them. An important addition to the literature of oppression, Dawn will resonate with the experience of many even fifty years later."
--Grant Rintoul, 1st Reading

"First published in 1975, Dawn is freshly and sublimely translated by Maureen Freely . . . a gutting masterpiece . . . The powerful believe in cruelty, in violence . . . But Oya, and Soysal, have a different faith. They actually believe the world can be better. Soysal gave her life to this belief, and Dawn, which ends on a hopeful note, illuminates a path. We’re not there, not even close. But nor are we completely broken."
--Brian O'Neill, Necessary Fiction