The In-Betweens: A Lyrical Memoir (Paperback) 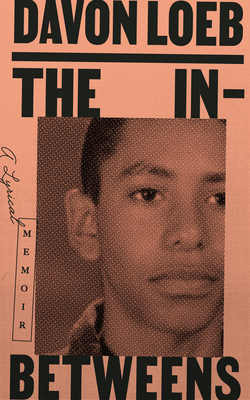 The In-Betweens: A Lyrical Memoir (Paperback)

The In-Betweens tells the story of a biracial boy becoming a man, all the while trying to find himself, trying to come to terms with his white family, and trying to find his place in American society. A rich narrative in the tradition of Justin Torres’s We the Animals and Bryan Washington’s Memorial, Davon Loeb’s memoir is relevant to the country’s current climate and is part of the necessary rewrite of the nation’s narrative and identity.

The son of a Black mother with deep family roots in Alabama and a white Jewish man from Long Island, Loeb grows up in a Black family in the Pine Barrens of New Jersey as one of the few nonwhite children in their suburban neighborhood. Despite his many and ongoing efforts to fit in, Loeb acutely feels his difference—he is singled out in class during Black History Month; his hair doesn’t conform to the latest fad; coaches and peers assume he is a talented athlete and dancer; and on the field trip to the Holocaust Museum, he is the Black Jew. But all is not struggle. In lyrical vignettes, Loeb vibrantly depicts the freedom, joys, and wonder of childhood; the awkwardness of teen years, first jobs, first passions. Loeb tells an individual story universally, and readers, regardless of subjectivity and relation, will see themselves throughout The In-Betweens.

Davon Loeb is an assistant features editor at The Rumpus. He earned an MFA in creative writing from Rutgers University–Camden and has had work published in Catapult, Ploughshares, Joyland, PANK, and elsewhere. He lives in New Jersey. Learn more at davonloeb.com.

“Utterly captivating and resonant, The In-Betweens deserves a top spot on your bookshelf.”
Chicago Review of Books

“This gorgeously told 'lyrical memoir' recounts Loeb’s curious, difficult, joyous journey to find a place in the world in light of his Southern Black and Long Island-Jewish heritage.”
Philadelphia Inquirer

“[Loeb] dances to a slow, beautiful ballad on every page. His story will move any reader, but it’s the craft of his work that truly shines.”
Debutiful


“While the memoir is masterfully told—Loeb employs a variety of craft techniques that have a powerful effect—what makes The In-Betweens so special is the thoughtfulness Loeb brings to his work.”
The Rumpus

“Sentence to sentence, The In-Betweens is awake to the awe of being in a body and the danger of negotiating a culture that wants to drive space between us, inside us. Davon Loeb is writing to stay alive under the harshest conditions, and he has given us a brilliant, devastating book.”
Paul Lisicky, author of Later: My Life at the Edge of the World

“Confession, manifesto, bildungsroman, and prayer, The In-Betweens is a meditation on bruise and healing. Loeb’s struggles become snapshots of how transformation occurs even where shards have been piled, where one waits ‘for something to happen, like flashes of red and blue and sirens pulsing.’ A truly extraordinary new voice.”
Roy G. Guzmán, author of Catrachos