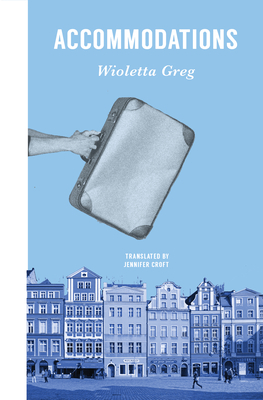 A continuation of her Man Booker-nominated debut, Accommodations is Swallowing Mercury all grown up

Accommodations follows Wiola after she leaves her childhood village, a close-knit agricultural community in Poland where the Catholic calendar and local gossip punctuate daily life. Her new independence in the nearby city of Czestochowa is far from a fresh start, as she moves between a hostel and a nuns' convent brimming with secrets, taking in the stories of those around her. In the same striking prose that drew readers to her critically acclaimed debut, Accommodations navigates Wiola's winding path to self-discovery.
WIOLETTA GREG is a Polish writer; she was born in a small village in 1974 in the Jurassic Highland of Poland. In 2006, she left Poland and moved to the UK. Between 1998-2012 she published six poetry volumes, as well as a novel, Swallowing Mercury, which spans her childhood and her experience of growing up in Communist Poland. Her works have been translated into seven languages.