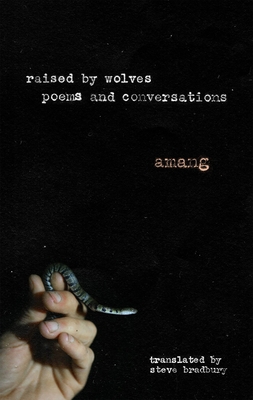 Winner of the 2021 PEN Award for Poetry in Translation

Incisive and confessional, Raised by Wolves collects the most acclaimed work of Taiwanese poet -filmmaker Amang. In her poems, Amang turns her razor-sharp eye to everything from her suitors (For twenty years I've loved you, twenty years / So why not say yes / You want to see my nude photos ?) to international affairs --You'd have to win the lottery ten times over / And the U.N. hasn't won it even once. Keenly observational yet occasionally absurd, these poems are urgent and lucid, as Amang embraces the cruelty and beauty of life in equal measure.

Raised by Wolves also presents a groundbreaking new framework for translation. Far from positing the transition between languages as an invisible and fixed process, Amang and translator Steve Bradbury let the reader in. Multiple English versions of the same Chinese poem often accompany dialogues between author and translator: the two debate as wide -ranging topics as the merits of English tenses, the role of Chinese mythology, and whether to tell the truth you have to lie a little, or a lot. Author, her poems, and translator, work in tandem, Wanting that which was unbearable / To appear unbearable / Just as it should be.