If You Kept a Record of Sins (Paperback) 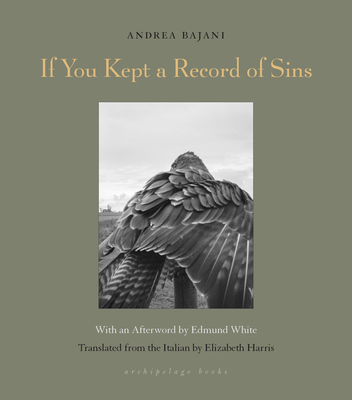 If You Kept a Record of Sins (Paperback)


On Our Shelves Now
Andrea Bajani's "beautiful, original, and deeply moving" (Michael Cunningham) novel, which Jhumpa Lahiri asserts "accumulates with the quiet urgency of a snowstorm."

A prismatic novel that records the indelible marks a mother leaves on her son after she abandons their home in Italy for a business she's building in Romania. Lorenzo, just a young boy when his mother leaves, recalls the incisive fragments of their life - when they would playfully wrestle each other, watch the sunrise, or test out his mother's newest scientific creation. Now a young man, Lorenzo travels to Romania for his mother's funeral and reflects on the strangeness of today's Europe, which masks itself as a beacon of Western civilization while iniquity and exploitation run rampant. With elliptical, piercing prose, Bajani tells a story of abandonment and initiation, of sentimental education and shattered illusions, of unconditional love.
Andrea Bajani is an Italian novelist, journalist, and poet whose work has been translated into many languages. His novel, Ogni promessa (Every Promise), won the oldest and most prestigious Italian literary award, the Bagutta Prize. His collection of short stories, La vita non è in ordine alfabetico, won the Settembrini Prize in 2014. Se consideri le colpe (If You Kept a Record of Sins) won the Super Mondello Prize, the Brancati Prize, the Recanati Prize, and the Lo Straniero Prize. He teaches at Rice University in the Department of Classical and European studies. ABOUT THE TRANSLATOR: Elizabeth Harris's translations from Italian include Mario Rigoni Stern's Giacomo's Seasons, Giulio Mozzi's This Is the Garden, and Antonio Tabucchi's Tristano Dies, For Isabel: A Mandala, and Stories with Pictures. Her prizes include a PEN/Heim Translation Fund Grant, an NEA Translation Fellowship, The Italian Prose in Translation Award, and the National Translation Award for Prose.
"A slim, astonishing book . . . Bajani etches an impressionistic portrait of a young man — like the foreign city outside his window — trapped in a shadow land between past and present." — Anderson Tepper, The New York Times

"[Bajani's] calm, elegant prose stands on its own, defying commentary. Bajani understands how the wounded often remain wounded, cut off from others and themselves. Such is the tragedy of the human story, which is somehow made less tragic by his remarkable ability to illuminate it for us." — Elaine Margolin, Los Angeles Review of Books

"After years of gradually widening distance between them, a man learns some truths about his absent mother when he travels abroad to bury her and settle her business affairs...Bajani’s spare prose delivers startling imagery...as well as quiet reflection as Lorenzo addresses the departed Lula as he moves around her chosen home away from home....Bajani’s lovely, quiet novel lives at the intersection of love and misunderstanding." — Kirkus Reviews (starred review)

". . . Throughout, family trauma parallels the collective trauma of an oppressed people, with no solace in the past and no real agency in the future. Bajani brings the full weight of his qualities as a poet, journalist, and professor of European Studies to bear, revealing in finely wrought prose the lasting scars of heartbreak on his characters and the body politic. This is deeply affecting." — Publishers Weekly (starred review)

"When a child is slowly abandoned by a parent, who does he or she grow up to become? Bajani answers the novel’s central question by skipping back and forth in time, weaving together scenes that show us, with devastating clarity, the unraveling of a relationship between a mother and her son, a tapestry of loss woven with quiet power and flawless artistry." – Naheed Patel, Public Books

"Beautifully written, If You Kept a Record of Sins reverberates profoundly with the loneliness of its characters -- haunting in the voice of Lorenzo, reaching out to a mother who is no longer -- and never really was -- there." — M. A. Orthofer, Complete Review

"Subtle and searing, an Italian man called Lorenzo visits the country to attend the funeral of his long-absent mother...The adept, patient style of the novel leaves lots of room for the reader to make their own appraisal of the choices of his mother, Lula, and their impact on the life of the child Lorenzo was and the adult he is now." — Declan O'Driscoll, Irish Times

"How are we remembered? Where do blame and grief meet? . . . Rather than judgement, Bajani’s method is one of lyrical indirection. From resentment to alienation, tenderness to anger, and indifference to joy, Lorenzo’s feelings are never stated outright, instead emerging sideways – from the background noise he doesn’t recognise . . . Bajani’s irresistibly spare narrative tracks our attempts to make sense of and judge one another." — Jessica Payn, the Arts Desk

"Elizabeth Harris has done incredible work in her translation, which in its continually sharp, clipped language reflects the stripped-down nature of the original. These qualities are not only relevant on a linguistic or stylistic level, but also in terms of the novel’s central characters, the hollowed-out voice of Lorenzo, a man who never describes his own emotions, as if he too wanted to be as empty as that infamous egg, an inheritance from his mother." — Brian Robert Moore, Reading in Translation

"This is a story of abandonment that lets fall revelations in delicate, tight prose the way a child might drop pennies into a creek. The ripples are deeply felt." — Bibi Deitz, Coveteur

"This is a novel of alienation – and a great one. Bajani is a master of emotional restraint and stylistic economy, his sparse Italian prose (admirably rendered, in equally sparse English, by Elizabeth Harris) amplifying the novel’s sense of estrangement . . . a book of haunting, unsettling beauty." — Costica Bradatan, the TLS

"The magic of this story lies entirely in the telling—in the delicate balancing of select, sharply depicted images within a spare, measured narrative that simmers with barely restrained emotional tension . . . Reading fiction this well-crafted is a joy." —Joseph Schrieber, Rough Ghosts


"If You Kept a Record of Sins by Andrea Bajani, translated from the Italian by Elizabeth Harris, is about a man following in the footsteps of a ghost. He’s traveled to Bucharest to bury and settle the affairs of his estranged mother, who left the family over a period of years to make a life around her business in Romania. Holding up his mother’s gradual separation beside the present, Bajani shows that grief is not a thing you move past but move through, and Harris’s translation captures the tenderness and melancholy of the journey."– Adam Levy, Transit Books