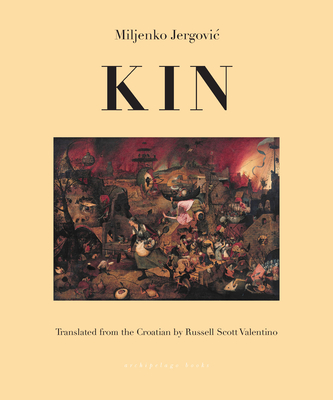 
In stock at publisher: Usually Ships to store in 3-5 Business Days.
Kin is a dazzling family epic from one of Croatia's most prized writers. In this sprawling narrative which spans the entire twentieth century, Miljenko Jergović peers into the dusty corners of his family's past, illuminating them with a tender, poetic precision.

Ordinary, forgotten objects - a grandfather's beekeeping journals, a rusty benzene lighter, an army issued raincoat - become the lenses through which Jergović investigates the joys and sorrows of a family living through a century of war. The work is ultimately an ode to Yugoslavia - Jergović sees his country through the devastation of the First World War, the Second, the Cold, then the Bosnian war of the 90s; through its changing street names and borders, shifting seasons, through its social rituals at graveyards, operas, weddings, markets - rendering it all in loving, vivid detail. A portrait of an era.
Novelist, short story writer, poet, and columnist, Miljenko Jergovic is a literary phenomenon whose writing is celebrated throughout Europe. His poetry collection Warsaw Observatory received the Goran Prize for young poets and the Mak Dizdar Award and his landmark collection of stories Sarajevo Marlboro received the Erich Maria Remarque Peace Prize. Mama Leone won the highly regarded Premio Grinzane Cavour for the best foreign book in Italy in 2003. His other works include Ruta Tannenbaum, The Walnut House, Buick Riviera, and Father.

Russell Scott Valentino is an American author, literary scholar, and translator. He has translated works from Italian, Croatian, and Russian, and his essays, poetry, and translated fiction have appeared in journals such as The Iowa Review, Two Lines, POROI, Circumference, and 91st Meridian. He is the recipient of NEA Literature Fellowships for translation in prose (2002 & 2016) and poetry (2010) and he received a PEN/Heim award in 2016. He currently teaches Slavic and Comparative Literature at Indiana University.
"Vast, generous-spirited story of family across the face of the 20th century in the turbulent Balkans . . . There is beauty aplenty, and ample monstrosity, in Jergović’s account, as well as many moments of mystery: a beekeeper’s coded journal, the alpenglow that surrounds Sarajevo as surely as a besieging army, the “living torment” that is existence, all come under Jergović’s empathetic eye. A masterwork of modern European letters that should earn the author a wide readership outside his homeland."
--Kirkus Reviews (starred review)

"Miljenko Jergović has lived as a “foreigner” in Zagreb since 1993, where, as narrator, he channels stories of Sarajevo and the ways in which the city has embodied the 20th century’s major flash points—religious intolerance, virulent nationalism, and world wars . . . Jergović devotes the first section to quotidian ancestral history, but even here the scope widens with soaring chapters on the geopolitical changes after WWII . . . dozens of shimmering vignettes build to the hallucinatory novella-length capstone “Sarajevo Dogs” . . . [Jergović’s] astonishing project offers endless rewards."
--Publishers Weekly (starred review)

"A superb English translation . . . Kin is deeply interested in moments that trickle down through the years, and how, even when languages and the names of countries have changed, when wars have completely reshaped the region, these fleeting seconds have stayed rooted in a family’s mind."
--Sarah McEachern, Los Angeles Review of Books

"In [an] excellent translation . . . Jergović mythologizes his family’s history in the manner of Thomas Mann . . . Writing about Sarajevo and its geography, Jergović delivers a nostalgic, angry, and beautiful tribute to his hometown."
--Damjana Mraović-O’Hare, World Literature Today

"Kin, Miljenko Jergović’s time-travelling, place-hopping epic, is at once a history of family and an ode to Yugoslavia. Spanning the entire 20th century, Kin traces the palimpsestic layers of the region’s past from the two World Wars through to the turmoil of the 90s. Taking the dusty objects of his family’s past and his own pockmarked memories as the subjects of his enquiry, the book is as much a comment on memory’s elusive surface as it is a social history of the region."
--Calvert Journal

" [Jergovic is] a poet, novelist, and journalist of the highest caliber...His concern is for the living and in this collection of stories about Sarajevo and its inhabitants he writes about them with the seriousness, sensitivity, quirky intelligence, and gentle humor of a master of the short story."
-- The New Republic

"Jergovic has the mien of the rare author whose gift is so innate he need only conquer a few demons and steady his hands enough to write it all down."
--San Diego Union Tribune

" From baking to beekeeping, from Satan to citizenship, from the assassination of Archduke Franz Ferdinand to war, famine, and poverty, Jergović covers the gamut of a hundred year period, a variety of languages, nationalities, religions, historical events and famous and ordinary people . . . Fact or invented, this is a superb family novel."
--The Modern Novel

"Jergović is neither naïve nor sentimental about the uses of storytelling . . . In a land marked by death and disappearances, storytelling saves the murdered from oblivion . . . In a region scarred by ethnic conflict, of missing persons and forgotten graves, the simple domestic act of remembrance can transform into a more powerful statement against the politics of hatred and annihilation. It is in the everyday that Jergović hopes to find salvation enough for the entire world."
--Duncan Stuart

"...a multilayered and complex text, which demonstrates why Jergović is one of the most prominent Croatian authors and one of the most translated European writers."
--World Literature Today on Mama Leone, a winner of Italy's 2003 Premio Grinzane Cavour for Best Book in Translation

"Charting the complexities of the past hundred years as endured by just one family ... Kin illustrates how consequences ripple across the generations and along chains of kinship, whether those ripples [are] formed by actions within the family or imposed upon it by social conditions of the time. . . . Translator Russell Scott Valentino . . . gracefully performed an enormous job."
--Tom Bowden, Book Beat

"Kin is an intimate and painstakingly detailed attempt to comprehend one’s own identity . . . Jergovic delivers a nostalgic, irate, touching, and, above everything, beautiful homage to Sarajevo and its geography."
--Damjana Mraovic-O’Hare, Transitions