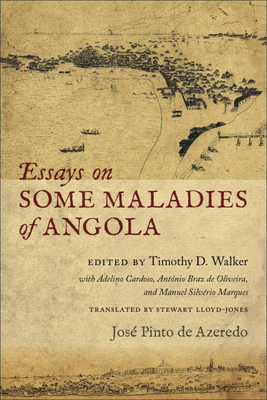 
On Our Shelves Now
Western science and pharmacology first learned about many African diseases, remedies, and medicinal practices through José Pinto de Azeredo's highly original and influential text. A unique Enlightenment-era medical text written specifically about health issues in Angola, this is the first work by a Portuguese physician to describe accurately, through first-hand observation, medical practices and substances used in Angola during the peak period of the transatlantic slave trade.

This first English-language edition of Essays on Some Maladies of Angola was translated by Stewart Lloyd-Jones (University of Stirling) and includes scholarly essays by Timothy Walker (University of Massachusetts Dartmouth), Adelino Cardoso (Universidade Nova de Lisboa), António Braz de Oliveira (Biblioteca Nacional de Portugal) and Manuel Silvério Marques (Universidade de Lisboa).
JOSÉ PINTO DE AZEREDO (1764–1810) was born in Brazil, trained in medicine at the University of Edinburgh, Scotland, and lived in western Africa (Luanda) for nearly a decade at the end of the eighteenth century. He observed indigenous African folk healers to learn their medical traditions. His Essays on Some Maladies of Angola (1799) is an empirical work of early ethnography through which African conditions influenced European ideas about medicine.
"It is testimony to the combination of geostrategic and natural resource interests in place at the time, and, ultimately, it bears witness to the unrelenting efforts of a learned and humanitarian physician who vigorously dealt with fearsome and often fatal diseases in one of the regions of the tropics."—Isis, Journal of the History of Science Society

"This work is of significant value even if we don't necessarily seek to force it into a triumphalist narrative, offering material of particular interest to scholars of colonial science and medicine, Enlightenment intellectual networks, and the role of surgeons and physicians in the Atlantic slave trade. The introductory essays and running footnotes also have the benefit of not only framing Azeredo's life but offering a concise history of the role of the commerce in medicines in the eighteenth century Portuguese empire, complete with extensive references to primary sources in Goa."—Bulletin of the History of Medicine