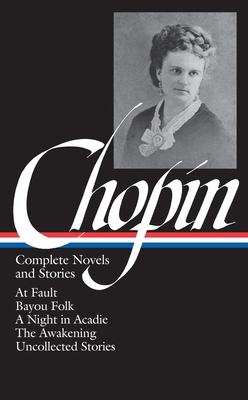 
On Our Shelves Now
From ruined Louisiana plantations to bustling, cosmopolitan New Orleans, Kate Chopin wrote with unflinching honesty about propriety and its strictures, the illusions of love and the realities of marriage, and the persistence of a past scarred by slavery and war. Her stories of fiercely independent women challenged contemporary mores as much by their sensuousness as their politics, and today seem decades ahead of their time. Now, The Library of America collects all of Chopin’s novels and stories as never before in one authoritative volume.

The explosive novel At Fault (1890) centers on a love triangle between a strong-willed young widow, a stiff St. Louis businessman, and the man’s alcoholic wife. In the two story collections Bayou Folk (1894) and A Night in Acadie (1897), Chopin transforms the popular local color sketch into taut, perfectly calibrated tales that portray Louisiana bayou cultures with sympathetic insight and an eye to the unresolved conflicts of a South reeling from the Civil War.

In The Awakening (1899), the novel that scandalized many of her contemporaries and effectively ended her public career as a writer, Chopin tells the story of Edna Pontellier, a restless, unsatisfied woman who embarks on a quixotic search for fulfillment. Rendered with masterful precision, detachment, and a suggestive ambiguity that defies easy judgments about Edna’s actions, The Awakening is the novel that restored Chopin to literary prominence after its rediscovery by critics in the 1960s and 1970s.

The volume also includes all the stories not collected by Chopin, including those meant for A Vocation and a Voice, a projected volume that her publisher canceled in 1900; stories that Chopin never tried to publish, such as the erotically daring “The Storm”; and “Ti Frère,” “A Horse Story,” and “Alexandre’s Wonderful Experience,” three stories which were found in 1992 in a long-lost cache of Chopin’s papers.

LIBRARY OF AMERICA is an independent nonprofit cultural organization founded in 1979 to preserve our nation’s literary heritage by publishing, and keeping permanently in print, America’s best and most significant writing. The Library of America series includes more than 300 volumes to date, authoritative editions that average 1,000 pages in length, feature cloth covers, sewn bindings, and ribbon markers, and are printed on premium acid-free paper that will last for centuries.
Kate Chopin (1850–1904) was born in St. Louis and moved to Louisiana where she wrote two novels and numerous stories. She is best known for the landmark book, The Awakening (1899), which advanced an implicit assertion of erotic freedom that got it banned from libraries and curtailed Chopin’s literary career. Forgotten for a time after her death, Chopin’s work has been rediscovered as inspiringly free-spirited and ahead of its time.

Sandra M. Gilbert, volume editor, is professor of English emerita at the University of California, Davis. She has published numerous volumes of criticism, a memoir, and six collections of verse; most recently she is the author of Acts of Attention: The Poetry of D. H. Lawrence (1990) and Kissing the Bread: New and Selected Poems 1969-1999 (2000).
“Chopin is not, and never has been, a writer who is easily summed up. Here we get everything—the complete stories and the novels—in one tidy, well-presented package… Chopin’s richness is best swallowed in great quantities, and this new edition makes that possible.” —Buffalo News