Songs of Praise based on the Bhagavad Gita (Paperback) 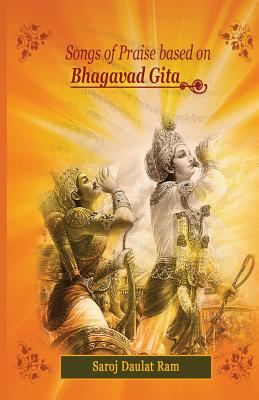 Songs of Praise based on the Bhagavad Gita (Paperback)

The Bhagavad Gita is the most important text of Hinduism, written over twenty centuries ago as a centerpiece of the great epic of Mahabharata, in which the royal cousins, Kurus and Pandus fight for the Kingdom of Bharat (ancient name of India). The Kurus had usurped the kingdom from the Pandus in a crooked game of dice, which led to a war between the heirs of the royal house on the field of Kurukeshtra (located near present day New Delhi).
Prince Arjuna, a stalwart warrior and one of the five Pandu brothers, is helped by Lord Krishna, his cousin and charioteer, who is also the Avatar (embodiment) of Lord Vishnu. Lord Krishna has come to earth to let good triumph over evil. When Prince Arjuna faces his cousins, uncles, teachers, and relatives whom he may have to destroy in battle, he becomes acutely distressed, lays down his weapons and refuses to shed the blood of his revered elders in the impending battle.
Thereupon, Lord Krishna, his charioteer, explains to him the meaning of good against evil, of doing one's rightful duty (dharma), and of treading the path of righteousness. Arjuna is convinced that salvation lies in doing one's duty to the best of one's ability.
Sanjay is the narrator of the story to the blind King Dhiritrashtra, who is the Kuru king. The story is told in 18 chapters, consists of over 700 couplets and is composed in Sanskrit by the sage Vyasa. The Bhagavad Gita immortalizes the epic Mahabharata and is read daily by millions of people all over the world. It is a treatise on the yoga of action; since we are given a life to live, how should we face it and live it?
That is the message of the Bhagavad Gita.