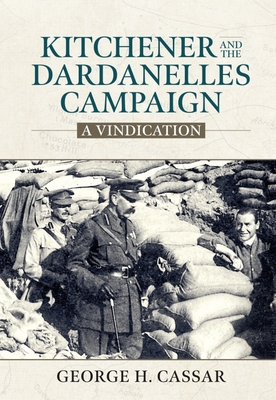 
Backordered: may take 2-4 weeks.
From author George Cassar's experience in researching and writing about various aspects of the First World War, he became convinced long ago that Kitchener was made a scapegoat by his political enemies in the cabinet, not only because they found him difficult to work with, but perhaps more importantly they needed to conceal their mistakes by blaming someone in authority who was no longer around to refute the charges. Professor Cassar thought about writing this book for at least a decade and what finally drove him to make that commitment was the way writers have continued to view Kitchener as principally culpable for the Dardanelles debacle.

As the architect of the naval plan to force the Dardanelles, Winston Churchill disregarded the elementary principles of war, driven as he was by wishful thinking and imagined benefits with the result that the scheme never had a chance of succeeding. As a vital step in rebuilding his political career, he had to reshape public perception of his part in the campaign. Thus he wrote a defense of his strategy in volume 2 of The World Crisis (1923). Churchill's account could not be verified against the facts as official records were inaccessible to the general public and would remain so until 1966. Even among recent writers who have condemned his naval plan there is a tendency to accept his version of events uncritically. But The World Crisis is not an accurate account of what occurred behind the scenes. Rather it is Churchill's attempt to rewrite history.

Churchill had won the approval of the war council in January to carry out the naval attack on condition that if resistance turned out to be stronger than expected, action would be terminated and, to avoid loss of face in the Muslim world, an announcement would be made that the bombardment was, in fact, a feint for a landing elsewhere. It was important that no publicity should attend the naval action in case the ships were forced to turned back. As soon as the bombardment against the Turkish forts began, Churchill, certain of victory and eager to claim the lion's share of the credit, went back on his word and issued a press release which drew world attention on the attack in the Dardanelles and the perceived objective. It was the biggest blunder of the campaign, foreclosing the option that the campaign would be halted should the ships fail to overcome the Turkish defenses -- which is what happened a month later.

In hindsight Churchill recognized the consequences of his selfish act and omitted any mention of his press release in his doctored account. By fabricating and distorting evidence he accused Kitchener of ordering the army to land on Gallipoli without obtaining the consent of the War Council. A wealth of new information based on official documents and minutes of the war council which I have introduced, will set the record straight and show that Churchill was unwittingly responsible for escalating the operation; as well as prove conclusively that by sending the army to invade Gallipoli, Kitchener was acting, not on his own, but in concert with the overwhelming sentiment in the war council. This authoritative account will also explore other charges against Kitchener that turned out to be without merit.