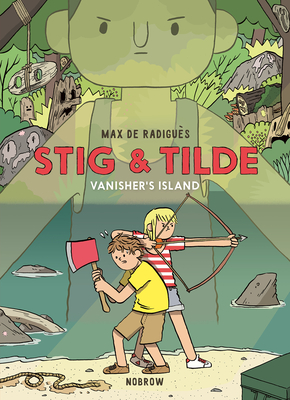 By Max de Radiguès
$13.95
In stock at publisher: Usually Ships to store in 3-5 Business Days

This is book number 1 in the Stig and Tilde series.

Stig and Tilde are just following along with tradition when they find themselves on an unexpected adventure.

Keeping with a local tradition, Stig and Tilde hop on a dinghy and head to a desert island to survive alone without adult supervision. However, a unexpected detour leads them to the wrong island and it looks like it's inhabited by something that isn't too fond of guests.

Born in Belgium in 1982, Max de Radiguès is a comic book author, editor for the ego employee and Sarbacane . He writes and draws for young people and adults. In September 2009, he was invited to one year residency at the prestigious Center for Cartoon Studies in White River Junction - Vermont, including James Sturm and Jason Lutes. He recounted his year of residency in his book Meanwhile in White River Junction from Six Feet Under the Earth, which was part of the official selection of the Angoulême International Comics Festival 2012.

He works in a large workshop in Brussels, Het Geslepen Potloden, where Flemish, French, and Swiss cartoonists collaborate.

“This Belgian import has a simple story and cleanly drawn style, yet delivers an utterly mysterious fascination, great for kids on the older end of the 7-12 range.”
—The New York Times

“[De Radiguès] renders his characters in a very simplified form […] So how does he make them emote? He gets a lot out of those emanata, whether they’re conveying surprise, dizziness, rage, fear, annoyance, confusion, relief or something else. He also gets an impressive range of feelings into the body language, simple as it is. […] You wouldn’t be wrong to see de Radiguès working in parallel to Charles Forsman.”
—The Comics Journal

“De Radigues has crafted a fun, somewhat old-fashioned adventure for kids that holds a few surprises. He also drifts into some darker territory that I certainly didn’t expect, but handles perfectly, and these are welcome aspects since they add an actual sense of danger to the story, which is pretty light-hearted.”
—The Beat