Rise of the Necrofauna: The Science, Ethics, and Risks of De-Extinction (Paperback) 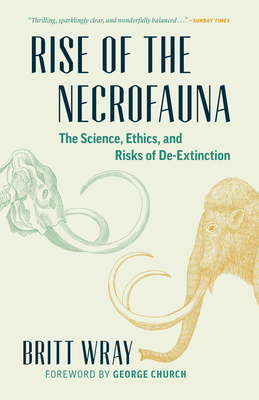 Rise of the Necrofauna: The Science, Ethics, and Risks of De-Extinction (Paperback)

What happens when you try to recreate a woolly mammoth--fascinating science, or conservation catastrophe? Jurassic Park meets The Sixth Extinction in Rise of the Necrofauna, a provocative look at de-extinction from acclaimed documentarist and science writer Britt Wray, PhD.In Rise of the Necrofauna, Wray takes us deep into the minds and labs of some of the world's most progressive thinkers to find out. She introduces us to renowned futurists like Stewart Brand and scientists like George Church, who are harnessing the powers of CRISPR gene editing in the hopes of "reviving" extinct passenger pigeons, woolly mammoths, and heath hens. She speaks with Nikita Zimov, who together with his eclectic father Sergey, is creating Siberia's Pleistocene Park--a daring attempt to rebuild the mammoth's ancient ecosystem in order to save earth from climate disaster. Through interviews with these and other thought leaders, Wray reveals the many incredible opportunities for research and conservation made possible by this emerging new field.But we also hear from more cautionary voices, like those of researcher and award-winning author Beth Shapiro (How to Clone a Woolly Mammoth) and environmental philosopher Thomas van Dooren. Writing with passion and perspective, Wray delves into the larger questions that come with this incredible new science, reminding us that de-extinction could bring just as many dangers as it does possibilities. What happens, for example, when we bring an "unextinct" creature back into the wild? How can we care for these strange animals and ensure their comfort and safety--not to mention our own? And what does de-extinction mean for those species that are currently endangered? Is it really ethical to bring back an extinct passenger pigeon, for example, when countless other birds today will face the same fate?By unpacking the many biological, technological, ethical, environmental, and legal questions raised by this fascinating new field, Wray offers a captivating look at the best and worst of resurrection science.

Published in Partnership with the David Suzuki Institute.

Britt Wray is a broadcaster and writer and has worked as a BBC podcast host and radio/television producer and host for CBC Radio and CBC TV. She holds a BSc in Biology and a PhD in Science Communication with a Focus on Synthetic Biology from the University of Copenhagen.