Billionaires: The Lives of the Rich and Powerful (Paperback) 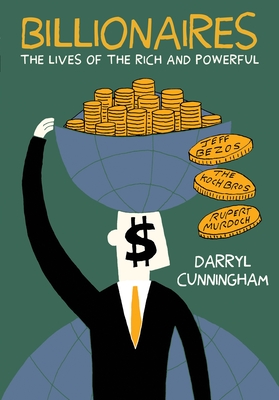 Billionaires: The Lives of the Rich and Powerful (Paperback)

In Billionaires: The Lives of the Rich and Powerful, Darryl Cunningham offers an illuminating analysis of the origins and ideological evolutions of four key players in the American private sector—Amazon founder and CEO Jeff Bezos, media mogul Rupert Murdoch, and oil and gas tycoons Charles and David Koch. What emerges is a vital critique of American capitalism and the power these individuals have to assert a corrupting influence on policy-making, political campaigns, and society writ large.

Cunningham focuses on a central question: Can the world afford to have a tiny global elite squander resources and hold unprecedented political influence over the rest of us? The answer is detailed through hearty research, common sense reasoning, and astute comedic timing. Billionaires reveals how the fetishized free market operates in direct opposition with the health of our planet and needs of the most vulnerable -- how Murdoch’s media mergers facilitated his war-mongering, how Amazon’s litigiousness and predatory acquisitions made them “The Everything Store,” and how the Kochs’ father’s refineries literally fueled Nazi Germany.

In criticizing the uncontrolled reach of power by Rupert Murdoch (in fueling the far right), the Koch Brothers (in advocating for climate change denial), and Jeff Bezos (in creating unsafe working conditions), Cunningham speaks truth to power. Billionaires ends by suggesting alternatives for a safer and more just society.

Darryl Cunningham is the cartoonist of five non-fiction books, including Supercrash: How to Hijack the Global Economy, and Billionaires. His comics explore subjects as diverse as mental health, science, economics, and politics. Cunningham has given talks at the London School of Economics and the City of Arts and Lights, Valencia. In 2015 he was one of 30 world-renowned photographers, painters, sculptors, writers, filmmakers and musicians who were invited to contribute to the Bill & Melinda Gates Foundation’s Art of Saving a Life project, to promote vaccination in the developing world. In 2018 he was awarded an Honorary Degree of Master of Arts from Leeds Arts University. Cunningham lives in the United Kingdom.

“It can take other authors whole books to say what Darryl can say in a single illustration.”—Jon Ronson, The Psychopath Test

“Tremendously well researched... I’m always in awe of the amount of information that Darryl manages to pack in to every one of his comic books.”—Robin Ince, BBC’s The Infinite Monkey Cage

"If you want to know why the world is such a mess, Darryl Cunningham provides a gripping and necessary briefing. His graphic novel Billionaires is some of the best comics journalism I’ve ever read. Cunningham manages to distill a tremendous amount of essential facts about some of the most dangerous and destructive people on earth, information made indelible by his low-key, acerbic cartooning. The drawings are remarkable, varied, and always on point." —Jeet Heer, National Affairs Correspondent at The Nation

"A witty but brutal critique of capitalism and corruption."—Publishers Weekly

"Cunningham’s comics journalism skills are unassailable. He has a gift for making the grotesque and unpalatable weirdly pleasurable. I was appalled and riveted and even amused throughout. Get this book, but for god’s sake get it from an independent bookstore. No One-Clicking, please." —Robert Kirby, The Comics Journal

"In prosecuting the case, Cunningham sticks to the facts. He’s particularly keen to catalog his subjects’ moral failings, allowing readers to extrapolate from there." —Rumaan Alam, The New Republic

"From Cunningham’s book emerge incisive critiques of the new gilded age of U.S. capitalism and of the way the ultra-wealthy have asserted ever more control over our media and politics, and our lives in general." —Kuo-Yu Liang, Library Journal

"Billionaires exposes the lives and lies of four modern billionaires: Rupert Murdoch, The Koch Brothers, and Jeff Bezos... Each section illustrates how these wealthy white men got their start—dispelling myths of self-made status along the way—and how they’ve leveraged their influence for personal gain, often at the expense of others." —Booklist