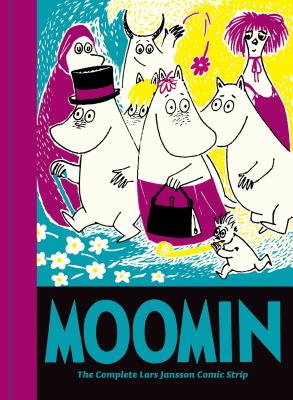 This is book number 10 in the Moomin series.

"Moomin is about freedom, tolerance, and optimism amid frustration, loss, and fear." —Modern Painters

Moomin: The Complete Lars Jansson Comic Strip, Volume Ten welcomes readers back to the beloved world of Moominvalley, where pancakes and jam are a perfectly acceptable supper and wealthy aunts can be altogether too fierce to handle. The tenth volume of Tove and Lars Jansson's classic comic strip features the macabre and hilarious "Moomin and the Vampire" and "The Underdeveloped Moomins." Together, the four stories in this collection display the poignancy, whimsy, and philosophical bent that constitute the Moomins' enduring appeal.

“[The Moomin stories are] simple enough to be enjoyed by kids, yet with enough philosophical depth to keep adults interested as well.” —PopMatters

“Whimsical and charming, Moomin's (mis)adventures suggest an Alice in Wonderland dream world with odd beings, unexplained connections, and events that freewheel out of control.” —Library Journal