Prince Martin and the Pirates: Being a Swashbuckling Tale of a Brave Boy, Bloodthirsty Buccaneers, and the Solemn Mysteries of the Ancient Order of t (Paperback) 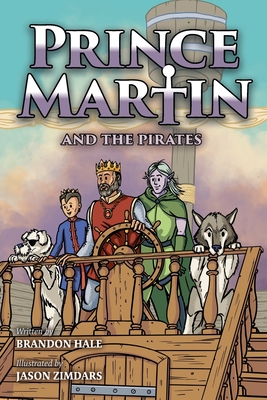 Prince Martin and the Pirates: Being a Swashbuckling Tale of a Brave Boy, Bloodthirsty Buccaneers, and the Solemn Mysteries of the Ancient Order of t (Paperback)

Read this action-packed saga as a stand-alone story or as part of the Prince Martin Epic series.

In this epic illustrated adventure told in riveting rhyming verse, Prince Martin, his Band of Brothers, and his father-the King-embark on a dangerous quest to recover friends lost at sea. Their exciting voyage takes them to the Tropical Main, where unfathomable secrets lay concealed in the deep. But that once-peaceful sea is now plagued by the Dread Pirate Kaine, his gruesome pets, and his infamous crew. When these notorious sea rovers capture the boy prince, Martin discovers that his only hope might come from the sea itself...

This high-stakes clash between good and evil has some scary parts on the way to a glorious, triumphal ending. Ages 9 and up. May not be suitable for younger or sensitive children.

Get your copy now - because their hearts will soar...

Praise for Prince Martin and the Pirates:

"This is a wonderful and magical book. It has dastardly pirates, radiant mermaids, a noble king, trusty knights, and, of course, the resourceful and ever-brave Prince Martin. What more could you ask I only wish my son was young again so I could read this book with him."

"Adventure, Pirates, Courage. This series is perfect for boys, and parents who want their boys to have something written just for the men their sons will become. The stories they find within these pages will take them farther into their imagination than any video game ever will, and dare them to become who they one day will be."

Books in the Prince Martin Epic chapter books series. Each tale can be read in order or as a stand-alone:

★ Prince Martin and the Thieves

★ Prince Martin and the Dragons

★ Prince Martin and the Cave Bear

★ Prince Martin and the Last Centaur

★ Prince Martin and the Pirates