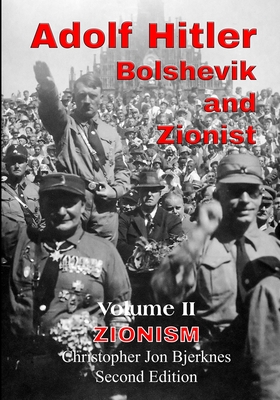 
Email or call for price.
The story would be beyond belief were it not for the indisputable proof documented throughout this forbidden book. The troubling tale, as told within these 600 pages by rabbis, rebbes, pastors, Zionists, Nazis, Holocaust survivors, historians, the Bible, the Talmud and cabalah goes like this: Adolf Hitler became Chancellor of Germany in 1933. The Nazis and Zionists immediately joined forces to transfer 60,000 of Germany's 600,000 Jews to Palestine and ultimately took the lives of 6,000,000 Jews. The Zionists kept Hitler in power by obstructing boycotts against German goods. They intervened in the press to prevent the world from knowing what was happening in Germany. The Babylonian Talmud predicted 1,500 years ago in the tractate Sanhedrin folio 97b that a cruel king would arise from the descendants of Amalek. He would punish the Jews and drive them back to God and to Israel. According to the gematria of Leviticus 25:10, the burnt offering of exactly six million Jews in a Holocaust would redeem the Jewish People and enable them to return to Palestine and build a Jewish nation after nearly two thousand years of exile. This had to happen in the year 1948. The Zionists commissioned this king and set him on the throne of the third German Empire in 1933. He was as harsh as Haman, and like Pharaoh drove the 600,000 Jews of Germany to seek refuge elsewhere. A tenth, 60,000 made it to Palestine through the Transfer Agreement which Theodor Herzl had proposed in 1896. Two-thirds of Europe's Jews perished and atoned for the sins of Jewry as the Jews were refined and tried in a furnace of affliction. All of this, every number, proportion and date went precisely according to plans iterated in the Tanakh 2,500 years ago. The king bore the Hebrew letter Aleph on his shield in the form of a swastika. It represented Moses and the exodus of the Jews. He carried a snake-like whip in his hand to drive the Jews away. The Babylonian Talmud proclaimed in the tractate Megillah folio 17b that the "wicked" assimilated Jews would all be put to death when the Jews gathered for the last time to enter Israel. Assimilated Jews had threatened to breed the Jews out of existence. They also bred the mixed multitude that had always formed a genocidal army against the Jews. The world was created solely to sustain the Jews so that they could obey the laws given to Moses and repair the world (Shabbat 88a). If Jewry disappeared the imperfect world would disappear together with them.