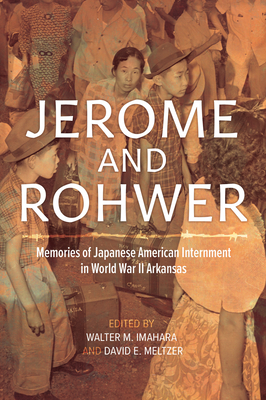 
In stock at publisher: Usually Ships to store in 3-5 Business Days.
Not long after the attack on Pearl Harbor that drew the United States into World War II, the federal government rounded up more than a hundred thousand people of Japanese descent—both immigrants and native-born citizens—and began one of the most horrific mass-incarceration events in US history. The program tore apart Asian American communities, extracted families from their homes, and destroyed livelihoods as it forced Japanese Americans to various “relocation centers” around the country. Two of these concentration camps—the Jerome and Rohwer War Relocation Centers—operated in Arkansas.

This book is a collection of brief memoirs written by former internees of Jerome and Rohwer and their close family members. Here dozens of individuals, almost all of whom are now in their eighties or nineties, share their personal accounts as well as photographs and other illustrations related to their life-changing experiences. The collection, likely to be one of the last of its kind, is the only work composed solely of autobiographical remembrances of life in Jerome and Rohwer, and one of the very few that gathers in a single volume the experiences of internees in their own words.

What emerges is a vivid portrait of lives lived behind barbed wire, where inalienable rights were flouted and American values suspended to bring a misguided sense of security to a race-obsessed nation at war. However, in the barracks and the fields, the mess halls and the makeshift gathering places, values of perseverance, tolerance, and dignity—the gaman the internees shared—gave significance to a transformative experience that changed forever what it means to call oneself an American.

Walter Imahara was born in California, where his family were prominent members of the local Japanese American farming community before World War II. After being interned at Jerome and Rohwer, he became a US Army officer, the owner of a successful nursery and landscape business, and a national champion weightlifter. He is the author of I Am an American: Japanese American, Asian Cajun.

David Meltzer is associate professor in the College of Integrative Sciences and Arts at Arizona State University in Mesa.

“This volume presents an intimate view of Japanese American incarceration in the South. It is a vital resource, preserving the voices and personal stories of the Imahara family and others who survived injustice at Rohwer and Jerome.”
—Kimberly Guise, senior curator and director for curatorial affairs, the National WWII Museum, New Orleans