The Ascent of Gravity: The Quest to Understand the Force that Explains Everything (Paperback) 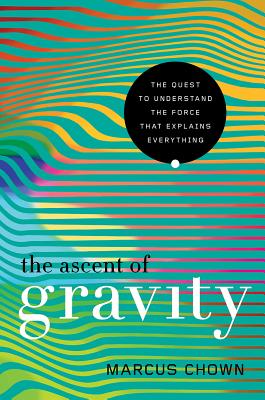 The Ascent of Gravity: The Quest to Understand the Force that Explains Everything (Paperback)

Why the force that keeps our feet on the ground holds the key to understanding the nature of time and the origin of the universe.

Gravity, to steal the words of Winston Churchill, is "a riddle, wrapped in a mystery, inside an enigma." And penetrating that enigma promises to answer the biggest questions in science: what is space? What is time? What is the universe? And where did it all come from?

Award-winning writer Marcus Chown takes us on an unforgettable journey from the recognition of the "force" of gravity in 1666 to the discovery of gravitational waves in 2015. And, as we stand on the brink of a seismic revolution in our worldview, he brings us up to speed on the greatest challenge ever to confront physics.

Marcus Chown is an award-winning writer and broadcaster. Formerly a radio astronomer at the California Institute of Technology in Pasadena, he is currently cosmology consultant of the weekly science magazine New Scientist. He is the author of Solar System, Quantum Theory Cannot Hurt You, The Never-Ending Days of Being Dead, and The Magic Furnace. He lives in England.
Delightful. Chown makes his discussion of bizarre phenomena, such as the way rotation actually distorts space intelligible and entertaining.

Award-winning Chown offers nonscientists an easily digestible guidebook to everything currently known about gravity, while arguing that a better understanding of this ubiquitous force will help penetrate the deepest mysteries of our universe. In prose refreshingly free of formulas and jargon, Chown once again establishes himself as a first- rate popular-science writer.

Gravity’s strength is minuscule, yet it dominates the universe. Science writers have not ignored the subject, but the world-shaking 2015 discovery of gravitational waves is provoking a flurry of updates. Chown is early out of the gate, and readers searching for a lucid popular account would do well to start here. A fine report on the latest piece of the puzzle that may, sooner or later, enable physicists to explain everything.

Chown's book offers readers and their inner atoms an enjoyable introduction to that history.

In a series of artfully connected and well-crafted stories, Marcus Chown traces humanity's 2,500-year quest to understand the nature and origin of matter.

Reading a well-written popular science book is one of the great pleasures of modern times, and this guided tour through life, the universe and everything affords that pleasure in abundance.

A pretty wonderful book.
— Richard Dawkins, author of 'The Magic of Reality' [praise for Marcus Chown]