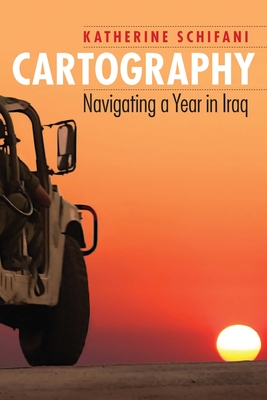 
In stock at publisher: Usually Ships to store in 3-5 Business Days.
Cartography describes Katherine Schifani’s time deployed in Iraq as a counterterrorism advisor with U.S. Special Forces in 2011. It is the story of one woman mapping the terra incognita of Iraq with questionable interpreters, nonexistent guidance, and an unclear purpose. It’s the story of a gay woman serving under the military’s Don’t Ask, Don’t Tell policy who realizes that the policy repeal she has long awaited is so overshadowed by a hostile environment that remaining closeted is more critical than ever.

At the heart of Cartography is Schifani’s quest to understand the Iraqi landscape and the Special Forces culture of American men she worked alongside as a gay woman and a member of the air force. Her memoir examines both the perils of being undertrained and underequipped to perform the job assigned to her in her role as an advisor and some of the unique situations—good and bad—her gender created in such an irregular combat environment. Schifani’s deployment was an exercise in exploration, observation, and navigating a wholly foreign land.

Katherine Schifani is a fourteen-year air force veteran and currently serves on the Air Force Reserve Command. She was deployed in 2011 with the army to Iraq, where, at twenty-five years old, she became the officer in charge and the head logistics advisor for the Iraqi Counter Terrorism Service and Iraqi Special Operations Forces.
“Cartography is, in a word, brilliant. Every war, I suspect, creates its own forms of lunacy, and Katherine Schifani’s searing, surreal, and at times hilarious memoir is the definitive guide to the multivalent insanities of the American war in Iraq. If you want to know what happens when countries lose their minds, read this superb book.”—Ben Fountain, author of Billy Lynn’s Long Halftime Walk

“Schifani’s powerful, evocative prose captures the violence, danger, and absurdity of military service and the mountains women must climb to ensure their safety and equality while they make the greatest sacrifice. . . . It’s a must-read for anyone trying to figure out the meaning of America’s forever wars.”—Anthony Swofford, author of Jarhead: A Marine’s Chronicle of the Gulf War and Other Battles