Run for Your Life (Paperback) 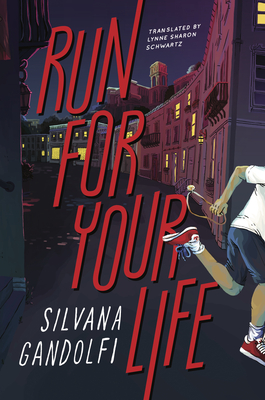 Run for Your Life (Paperback)


On Our Shelves Now
From one of Italy’s favorite authors of young adult literature comes a gripping, true-to-life thriller of a Sicilian boy’s fight to survive after his family is torn apart by the Mafia.


A talented young runner, Santino lives in Palermo, Sicily—a beautiful region of Italy that’s dominated by the Mafia. With Santino’s first communion approaching, his father and grandfather carry out a theft to pay for the party—but they steal from the wrong people. A young, cocky Mafioso summons them to a meeting, and they bring the boy. As Santino wanders off into the old abandoned neighborhood, he hears shots and runs back to see two armed men and his father and grandfather slumped over in the car. The boy barely escapes with his life. Now, he’s left with a choice: cooperate with police and be a “rat,” or maintain Omertà: the code of silence.

Twelve-year-old Lucio lives in the northern Italian city of Livorno and dreams of sailing when not taking care of his his young sister, Ilaria, and his sick mother, who is convinced that a witch has cursed her. One day, Lucio’s mother goes missing and he receives a mysterious text: “Come to Palermo. Mamma is dying.” Panicked, Lucio grabs Ilaria and rushes to Sicily, where Lucio’s and Santino’s stories converge with explosive results.

Inspired by a real-life Mafia episode, Silvana Gandolfi’s Run for Your Life is a powerful survival story of young people finding the courage to do the right thing when faced with the cruel realities of the adult world.
About the Author:

Silvana Gandolfi has written many acclaimed books for young people and is one of Italy’s most widely translated authors. Her novel for children Aldabra, or The Tortoise Who Loved Shakespeare has also been translated into English by Lynne Sharon Schwartz. Among her numerous awards is the Andersen Prize, Italy’s most important prize for children's literature. She lives in Rome.

Lynne Sharon Schwartz has published twenty-five books of fiction, nonfiction, essays, poetry and translation. Her reviews and criticism have appeared in many leading magazines and newspapers. She has received grants from the Guggenheim Foundation, the National Endowment for the Arts, and the New York State Foundation for the Arts, and has taught in writing programs in the United States and abroad. She is presently on the faculty of the Bennington Writing Seminars.
"Run for Your Life ... confronts its central theme, the Mafia, head on. Violence is always present, in a way that suggests contemporary Sicily still is tied to its ancient demons.... This is a true coming-of-age novel in which violence is not masked behind a metaphor…. The book is also distinguished by its narrative structure: the suspense keeps readers glued to the page from beginning to end, and throughout stimulates their powers of judgment."
— Prix Sorcières Judges’ Citation—Best Novel for Teens

“Originally published in Italy, Gandolfi’s novel tells the story of two Italian boys, 7-year-old Santino, who lives in Sicily, and 12-year-old Lucio, who lives in northern Italy…. The novel is a compelling one, which, in its second half, becomes a fast-paced story of suspense that vividly demonstrates the inextricable links between the Mafia and Sicilian life. Schwartz’s translation nicely captures the story’s spirit.”
— Michael Cart

“A brilliantly executed novel that older readers won’t be able to put down, Run for Your Life is inspired by real-life Mafia encounters by leading Italian author, Silvana Gandolfi. Intelligent, heart-pounding and thought-provoking, this novel is a must-read.”
— Kendal A. Rautzhan

“Five-year-old Santino and 12-year-old Lucio are pulled into the mafia underworld in this novel, which is based on a real-life episode. With Santino’s first communion approaching, his father and grandfather steal some goods to pay for the party, but they cross a local Sicilian mafia member. Both men are killed, and Santino himself is shot but manages to hide. He is miraculously rescued, and he must now decide whether to inform on the men who killed his family or keep the code of silence….the location and mafia connections provide much to interest readers.”
— Publishers Weekly

“I was fascinated by this spare, dark but relatable immersion in Sicilian culture and its inextricable connections to the Mafia. Strong male characters and lots of action will make this appeal to reluctant readers, and those interested in other cultures with find the literary style refreshingly different. Definitely 12  due to violence and feeling of danger.”
— Robin Stern, Books Inc. (Santa Clara, CA)

“I loved Run For Your Life. Silvana Gandolfi tackles the difficult topic of how the mafia affects everyday lives and depicts the powerlessness of the children in a very real way. The author's different points of view intrigued me. I was totally surprised by the 'twist' and even uttered a loud, ‘Ohhhh!’ in a public waiting room. It's not often that a book blindsides me in such a rewarding way. What an elegantly well constructed plot. I am so pleased that teen readers will get to experience this translation. It will definitely have them asking for more.”
— Jen Kraar, City of Asylum (Pittsburgh, PA)