Encyclical on Climate Change and Inequality: On Care for Our Common Home  (Paperback) 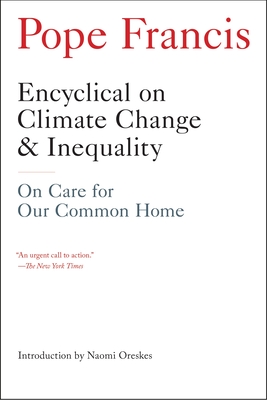 Encyclical on Climate Change and Inequality: On Care for Our Common Home  (Paperback)


On Our Shelves Now
The complete text of Laudato Si’, the landmark encyclical letter from Pope Francis that, as Time magazine reported, “rocked the international community”

In the Encyclical on Climate Change and Inequality, the beloved Pope exhorts the world to combat environmental degradation and its impact on the poor. In a stirring, clarion call that is not merely aimed at Catholic readers but rather at a wide, lay audience, the Pope cites the overwhelming scientific evidence of climate change, and does not hesitate to detail how it is the result of a historic level of unequal distribution of wealth.

It is, in short, as the New York Times labeled it, “An urgent call to action . . . intended to persuade followers around the world to change their behavior, in hopes of protecting a fragile planet.”

With an insightful and informative introduction by Harvard professor Naomi Oreskes, famed for her bestselling Merchants of Doubt: How a Handful of Scientists Obscured the Truth on Issues from Tobacco Smoke to Global Warming.
Born Jorge Mario Bergoglio, POPE FRANCIS has been the Pope of the Catholic Church since March 13, 2013, when he became the 266th pontiff. He is the first Latin American and the first Jesuit to lead the Roman Catholic Church—and the first non-European leader of the church in 1,200 years. He took the name Francis after St. Francis of Assisi. Born in Buenos Aires in 1936 to Italian immigrant parents, Pope Francis was ordained as a Catholic priest in 1969. He became a bishop in 1992 and the Archbishop of Buenos Aires in 1998, and, in 2001, was appointed as a cardinal by Pope John Paul II. Devoted to rectifying social injustices and economic inequality, Pope Francis has said that he “would like to see a church that is poor and is for the poor.”

NAOMI ORESKES is Professor of the History of Scence and Affiliated Professor of Earth and Planetary Sciences at Harvard University. Her opinion pieces have been featured in The New York Times, the Washington Post, Nature, Science, and other leading publications. She is the author of a number of books, including Merchants of Doubt: How a Handful of Scientists Obscured the Truth on Issues from Tobacco Smoke to Global Warming, co-authored with Erik M. Conway. In May 2014, she attended “Sustainable Nature, Sustainable Humanity,” a meeting of the Pontifical Academy of Sciences that helped to lay the foundations for Pope Francis’s Encyclical.
Praise for the Encyclical on Climate Change and Inequality

“An urgent call to action.”
—The New York Times

“This breathtaking amalgam of urgency and poetry mines the spirit and appeals to the moral core... That a secular publisher, Melville House, chose to print in its entirety the papal document...bespeaks its relevance beyond the walls of the Roman Catholic Church."
—Chicago Tribune

“The most astonishing and perhaps the most ambitious papal document of the past 100 years.”
—The Guardian

“A powerful, prophetic, and personal plea for governments, religions, businesses and individuals to work together to address climate change.”
—Time

“The pope’s clarion call adds an ethical dimension to a debate too often bogged down in warring statistics and economic arguments . . . His powerful message on climate change should have the skeptics and deniers, who’ve stood in the way of meaningful action, squirming in their seats and feeling the heat.”
—USA Today

“The letter isn’t just a manifesto for clergy and bishops, but doubles as a call to action with scientific rational, written in plain language and addressed to ‘every person living on this planet.’”
—Chicago Tribune

“In his masterful grasp of the science behind climate change, the pontiff unmasks himself as a policy wonk.”
—The Washington Post

“A bold act by the pope, the encyclical in many ways reflects a movement that has been growing for decades.”
—Los Angeles Times