The Civil War: The Final Year Told by Those Who Lived It (LOA #250) (Library of America: The Civil War Collection #4) (Hardcover) 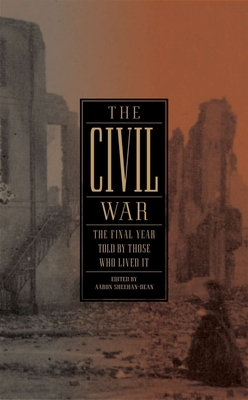 The Civil War: The Final Year Told by Those Who Lived It (LOA #250) (Library of America: The Civil War Collection #4) (Hardcover)


On Our Shelves Now
Featuring hundreds of first-hand writings from the American Civil War, this final installment of the highly acclaimed four-volume series traces events from March 1864 to June 1865

After 150 years the Civil War still holds a central place in American history and self-understanding. It is our greatest national drama, at once heroic, tragic, and epic—our Iliad, but also our Bible, a story of sin and judgment, suffering and despair, death and resurrection in a “new birth of freedom.” The Civil War: The Final Year brings together letters, diary entries, speeches, articles, messages, and poems to provide an incomparable literary portrait of a nation at war with itself, while illuminating the military and political events that brought the Union to final victory and slavery and secession to their ultimate destruction.

The final volume of this highly acclaimed four-volume series begins with the controversial Kilpatrick-Dahlgren raid on Richmond in March 1864 and ends with the proclamation of emancipation in Texas in June 1865. It collects 160 pieces by more than one hundred participants and observers, among them Abraham Lincoln, William T. Sherman, Ulysses S. Grant, Jefferson Davis, Robert E. Lee, Frederick Douglass, Harriet Ann Jacobs, Walt Whitman, Henry Adams, and Herman Melville, as well as Union officers Charles Harvey Brewster, James A. Connolly, and Stephen Minot Weld; Confederate diarists Catherine Edmondston, Kate Stone, and Judith W. McGuire; freed slaves Spottswood Rice, Garrison Frazier, and Frances Johnson; and Confederate soldiers J.F.J. Caldwell, Samuel T. Foster, and William Pegram. The selections include vivid and haunting firsthand accounts of battles and campaigns—the Wilderness, Spotsylvania, Cold Harbor, Atlanta, the Crater, Franklin, and Sherman’s march through Georgia and the Carolinas—as well as of the Fort Pillow massacre; the struggle to survive inside Andersonville prison; the burning of Columbia and Richmond; the passage of the Thirteenth Amendment; the surrender at Appomattox; and Lincoln’s assassination.

The Civil War: The Final Year includes an introduction, headnotes, a chronology of events, biographical and explanatory endnotes, full-color endpaper maps, and an index.
AARON SHEEHAN-DEAN is Fred C. Frey Chair in Southern Studies at Louisiana State University. He is the author of Why Confederates Fought: Family and Nation in Civil War Virginia and the Concise Historical Atlas of the U.S. Civil War and the editor of The View from the Ground: Experiences of Civil War Soldiers and Struggle for a Vast Future: The American Civil War.