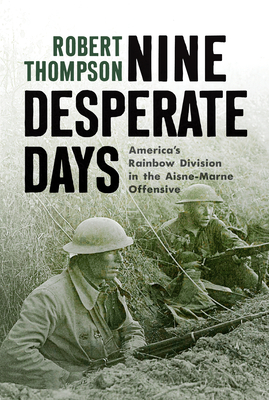 American forces entered World War I combat in October 1917, but it was not until July 1918 that they went on the offensive for the first time. Among the units selected for this operation was the 42nd Division, or the “Rainbow Division” as it was known popularly. This division, which was composed of National Guard units from twenty-six states, including Joyce Kilmer’s 69th New York Infantry, would spend 164 days in combat, a number exceeded by only two other American divisions. However, it was the nine days from July 25 to August 2, 1918 that were the most terrible and heroic in the division’s history. General of the Army Douglas MacArthur, who served as the division’s chief of staff, later said of the Rainbow Division’s fighting during those pivotal days, “There was neither rest nor mercy.” During those nine days, the Rainbow Division would spearhead the Allied attack in the Aisne-Marne region, the final phase of the Second Battle of the Marne, which saw the last major German offensive on the Western Front defeated. Unfortunately, American leadership proved to be completely unprepared for a dynamic war of maneuver. Basing decisions on wildly inaccurate information about the Germans, senior commanders ordered the men of the Rainbow Division to make ill-advised assaults again and again with little support. Facing an enemy who was determined to hold itspositions, these National Guardsmen fought with courage and determination to gain what was often only yards of ground, and did so at a deadly cost.

In Nine Desperate Days: America’s Rainbow Division in the Aisne-Marne Offensive, historian Robert Thompson chronicles the hardships and tenacity of the men from the 42nd Division during this pivotal campaign. The Americans did not break despite heavy losses, and were able to drive the Germans back from territory they initially gained. The efforts of the Rainbow Division during Aisne-Marne were key to the ultimate Allied victory and are a symbol of American valor and sacrifice during the “war to end all wars.”
ROBERT THOMPSON is a historian and former career military officer. He has a BA in history from Texas Tech University and a graduate degree in military studies from American Military University. He is author of a number of books, including Suddenly Soldiers: The 166th Infantry Regiment in World War I, finalist for the Army Historical Foundation Distinguished Writing Award. He lives near St. Louis, Missouri.

“This work is based upon exhaustive documentation that includes official and unofficial histories, published accounts of division members, unpublished memoirs, letters, journals, and numerous secondary sources. The integration of these sources provides the reader with a very clear account of the Rainbow Division’s service, especially the nine desperate days. The story told is gripping and portrayed vividly through the words of the actual participants, primarily enlisted personnel, and junior officers. For readers seeking to uncover the nature of combat in World War 1 as experienced by division personnel in combat, this is a worthwhile read. Thompson deserves commendation for bringing the story of the 42d Division’s nine critical days of heroic service to modern readers. The volume is replete with an index, endnotes, a bibliography, and contains many photographs and maps.”—Journal of America’s Military Past

“Robert Thompson offers an evocative account of one of the most storied America divisions during its hardest fought battle of the Great War. Nine Desperate Days vividly chronicles the role that the 42nd Division played in what would be the war’s turning point, the Aisne-Marne Offensive.”—Richard Faulkner, author of Pershing’s Crusaders: The American Soldier in World War I

“The fighting of the Rainbow Division in the Second Battle of the Marne, at Croix Rouge Farm, and along the Ourcq river, was as brutal—and as filled with courage—as any fighting in American history. Bob Thompson tells this important story with clarity, thoroughness, and a sensitivity to the humanity of its heroic participants.”—Mark E. Grotelueschen, author of The AEF Way of War: The American Army and Combat in World War I