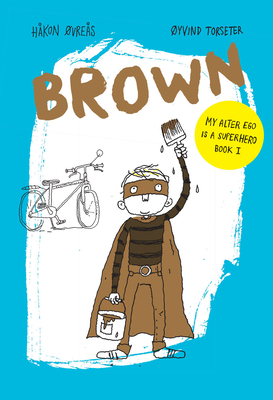 By Øyvind Torseter (Illustrator), Håkon Øvreås
$9.95
On Our Shelves Now

"Brown is a warm and powerful story of friendship and courage, full of creativity and everyday magic."--From the jury statement, Nordic Council Children's and Young People's Literature Prize

Guided by his grandfather's ghost, two cans of paint, and a little help from his friends, Brown can do anything Just as long as nobody's parents find out.

Brown is the fantastical first book in the award-winning My Alter Ego Is A Superhero series from Norway, Brown has been sold into twenty-seven languages and is illustrated throughout by the now-familiar and beloved yvind Torseter.

New in the neighborhood and hounded by fort-wrecking bullies, Rusty is looking glum. And to top it all off, his grandfather has just died. Rusty is stuck sorting out his emotions while the adults are busy sorting out the "practicalities" with the hospital. But one dark night, after watching a superhero movie on TV, Rusty gets an idea... Dressed in brown pants, a black-and-brown striped shirt, a brown mask and cape, and his mother's brown belt, the superhero BROWN is born Guided by his grandfather's ghost, two cans of paint, and a little help from his friends, Brown can do anything Just as long as nobody's parents find out.

yvind Torseter is a Norwegian artist and illustrator who has created eight books on his own and several with other authors. He's received numerous awards for his books, including a Bologna Ragazzi Award and the Norwegian Book Art Prize. In 2014, yvind was a finalist for the prestigious Hans Christian Andersen Award. Other titles with Enchanted Lion Books include: My Father's Arms Are a Boat, The Hole, Why Dogs Have Wet Noses, The Heartless Troll and others.