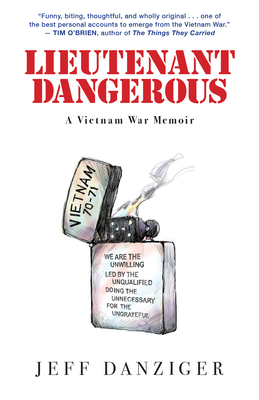 
In stock at publisher: Usually Ships to store in 3-5 Business Days.
"A must-read war memoir… with zero punches pulled, related by one of the most incisive observers of the American political scene." —KIRKUS (starred review)

Jeff Danziger, one of the leading political cartoonists of his generation, captures the fear, sorrow, absurdity, and unintended but inevitable consequences of war with dark humor and penetrating moral clarity.


If there is any discipline at the start of wars it dissipates as the soldiers themselves become aware of the pointlessness of what they are being told to do.

A conversation with a group of today’s military age men and women about America’s involvement in Vietnam inspired Jeff Danziger to write about his own wartime experiences: “War is interesting,” he reveals, “if you can avoid getting killed, and don’t mind loud noises.”

Fans of his cartooning will recognize his mordant humor applied to his own wartime training and combat experiences: “I learned, and I think most veterans learn, that making people or nations do something by bombing or sending in armed troops usually fails.”

Near the end of his telling, Danziger invites his audience—in particular the young friends who inspired him to write this informative and rollicking memoir—to ponder: “What would you do? . . . Could you summon the bravery—or the internal resistance—to simply refuse to be part of the whole idiotic theater of the war? . . . Or would you be like me?”
Jeff Danziger, one of the most widely recognized political cartoonists of his generation, is syndicated by the Washington Post News Service and is the recipient of the Herblock Prize and the Thomas Nast (Landau) Prize. He served in the US Army 1967-1971, one year in Vietnam in the First Air Cavalry, the 11th ACR and other units. He received the Bronze Star and the Air Medal.
“Lieutenant Dangerous is, the author notes, a "sad story, full of waste and loss." It's powerful. Put it next to Tim O'Brien's "The Things They Carried" on your bookshelf.”
--Laurie Hertzel, The Minneapolis Star Tribune

An "important book . . . at times mordantly funny, at others sparking with anger."
--The Washington Post

"By turns funny, sad, horrifying, and thought-provoking . . . reads like a cross between Joseph Heller’s Catch-22 and the television show M.A.S.H.”
--The Christian Science Monitor

"As with his cartooning, Danziger pulls no punches with his description of his time in the service and Vietnam."
-- The Florida Times-Union

"A must-read war memoir . . . with zero punches pulled, related by one of the most incisive observers of the American political scene."
-- KIRKUS reviews (starred review)

"In clear language he [Danziger] describes both the horrors and absurdities of war and the toll it takes on a soldier.
-- The Rutland Herald

"Brilliant political cartoonist Jeff Danziger has written a crackerjack new book...The book is a rollicking, honest, cynical and, at times, tragic recollection of that dreadful and deceitful war."
-- Valley News

“Lieutenant Dangerous is a forthright, brutally honest memoir of one American’s experiences during the time of the Vietnam War.”
--The North Star Monthly

“Danziger’s book is a note to the wise. You can forget about the Vietnam War. Certainly, the past cannot be recovered.  But it pays to be on guard not to repeat the same mistakes in the future. Danziger has written a fine book and it is well worth reading.”
--Global Insights

"His book, which careens from political satire to wrenching personal history with a highly palatable dollop of social analysis, is as relevant today as it would have been when the events it describes were taking place."
--Who What Why

"Mr. Danziger be­longs to a gen­er­a­tion that was shaped by the war in Viet­nam and the po­lit­i­cal up­heaval it caused.  He has suc­ceeded in what he set out to do — to nar­rate one young man’s jour­ney through the worst of that mael­strom.  And he has man­aged to set it all down with­out so much as a whiff of un­de­served nos­tal­gia.
--The Barton Chronicle