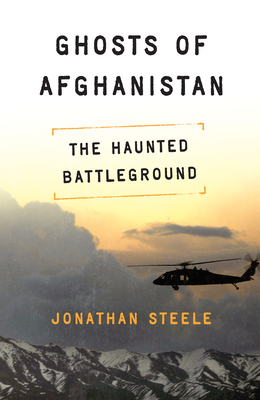 
Email or call for price.
A masterful blend of graphic reporting, illuminating interviews, and insightful analysis. Ghosts of Afghanistan is the first account of Afghanistan's turbulent recent history by an independent eyewitness.

Jonathan Steele, an award–winning journalist and commentator, has covered the country since his first visit there as a reporter in 1981. He tracked the Soviet occupation and the communist regime of Najibullah, which held the Western–backed resistance at bay for three years after the Soviets left. He covered the arrival of the Taliban to power in Kabul in 1996, and their retreat from Kandahar under the weight of U.S. bombing in 2001. Most recently Steele has reported from the epicenter of the Taliban resurgence in Helmand.

Ghosts of Afghanistan turns a spotlight on the numerous myths about Afghanistan that have bedeviled foreign policy–makers and driven them to repeat earlier mistakes. Steele has conducted numerous interviews with ordinary Afghans, two of the country's Communist presidents, senior Soviet occupation officials, as well as Taliban leaders, Western diplomats, NATO advisers, and United Nations negotiators.

Comparing the challenges facing the Obama Administration as it seeks to find an exit strategy with those the Kremlin faced in the 1980s, Steele cautions that military victory will elude the West just as it eluded the Kremlin. Showing how and why Soviet efforts to negotiate an end to the war came to nothing, he explains how negotiations today could put a stop to the tragedies of civil war and foreign intervention that have afflicted Afghanistan for three decades.
Jonathan Steele is the former chief foreign correspondent for the Guardian. He has won numerous journalistic awards, and he has twice been named International Reporter of the Year at the British Press Awards. A regular broadcaster on the BBC and CNN, Steele has written several books on international affairs. He lives in London.
Praise for Ghosts of Afghanistan:

"Steele has covered events in Afghanistan for many years, and he skewers with palpable glee the myths and half–truths that are peddled by politicians, generals, official spokesmen, and too many commentators." —The Observer

"With the debate raging over whether to negotiate with the Taliban, or continue to slaughter its leadership in night raids in the hope of forcing a weakened movement to the table later, the author notes the grip of history on US military decision–making." —The Telegraph

"In this original look at the West's obsession with Afghanistan the ghosts include, of course, the inevitable innocents who fall in war but also the public myths, official lies and inconvenient truths that lie behind so much of the bloodshed there. In a riveting chapter, Steele also puts to rest the notion that America had no choice but to go to war after Osama bin Laden's orchestration of the 9/11 attacks." —Seymour Hersh, The New Yorker

"Ghosts of Afghanistan is the best single book on the inter–related US policy crisis in Afghanistan and Pakistan and should be read by all students of foreign affairs." —Selig S. Harrison, author of Out of Afghanistan: The Inside Story of the Soviet Withdrawal

"Jonathan Steele provides an astute and powerful analysis of Afghanistan's recent history. As a correspondent who witnessed many of the key events at first–hand, his account is enriched by insights from Afghans from across the political arena, which both contribute to an understanding of the country's turbulent history and help to demolish some of the prevailing myths. This work raises important questions about the purpose and effectiveness of ten costly years of international engagement in Afghanistan, and should be required reading for those planning the imminent transition to full Afghan control." —Jolyon Leslie, author of Afghanistan: The Mirage of Peace

"Drawing on more than three decades of reporting from and on Afghanistan, Jonathan Steele offers the best account yet of why, in ignoring the lessons of the Soviet intervention, the Americans are condemned to make many of the same mistakes. He explodes the key myths about the Russians' record. He shows, quietly, how the only sane solution is the one Gorbachev adopted almost from the moment he took power: involve all the internal parties, including the insurgents, and the regional powers in brokering peace. A brilliant and disturbing book by one of the most acute and best informed contemporary observers of Afghanistan." —Sherard Cowper–Coles, British Ambassador to Kabul 2007–2009 and Foreign Secretary's Special Representative for Afghanistan and Pakistan 2009–2011

"Jonathan Steele is a thirty–year veteran of the twists and turns of foreign involvement in Afghanistan. His simple and compelling central premise is a frustratingly circular story of how the foreigners, Russians or Americans and their British and other allies, never seem to learn that Afghans are their own people. The author is word–weary and war–weary in his account of outsiders' Afghan myths but he does not allow this to get him, or the reader, down. He offers a sparely written, fast paced indictment of the follies of Afghan's foreign occupiers." —Mark Malloch Brown, former United Nations Deputy Secretary–General

"Few journalists have been on the ground in Kabul from the early days of a more–than–thirty–year war. In Ghosts of Afghanistan Jonathan Steele provides fascinating detail of memorable meetings and moments over the past three decades, boldly challenging widely held views of Afghanistan's turbulent history from Soviet to American involvement. This is essential reading at a time when the West is pondering the legacy of its intervention and trying to find a way forward." —Lyse Doucet, BBC

"Throughout history Afghanistan has shown the foolishness of great powers trying to order the world after their own lights. Time and again, invaders have tried, and retreated in bloody defeat. Today NATO, far away from its supposed theatre of concern, is making even worse mistakes than the Russians did in the 1980s. With a thirty–year experience of reporting assignments in Afghanistan no–one has studied this extraordinary country more closely than Jonathan Steele, nor charted so meticulously how outside intervention has worsened internal discord. His is a sobering essay on the empire of folly." —Simon Jenkins, author of Thatcher & Sons: A Revolution in Three Acts

"Jonathan Steele has covered the sweep of thirty years of history in Afghanistan and chronicled the lessons of first the Russian, and then the American–led occupations. They are lessons President Obama and his allies have still not fully grasped. This excellent book is a painfully honest account of successive unwinnable wars. It is the text book Mr Obama and others will need if Afghanistan is ever to be left to find its own peace and prosperity." —Jon Snow, Channel 4 News (UK)

"This book is a gripping history of the wars in Afghanistan explaining why successive outsiders have consistently got things so wrong. It is, at the same time, an intensely moving account of how that history was experienced by individual Afghans whom Jonathan Steele encountered in more than thirty years of reporting those wars." —Mary Kaldor, Professor of Global Governance, London School of Economics