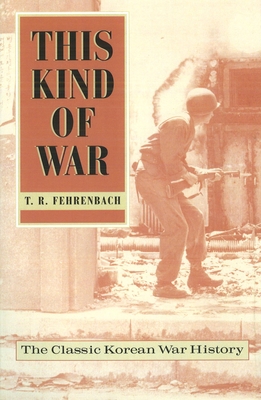 
In stock at publisher: Usually Ships to store in 3-5 Business Days.
Selected for the 2019 Commandant's Professional Reading List

Updated with maps, photographs, and battlefield diagrams, this special fiftieth anniversary edition of the classic history of the Korean War is a dramatic and hard-hitting account of the conflict written from the perspective of those who fought it. Partly drawn from official records, operations journals, and histories, it is based largely on the compelling personal narratives of the small-unit commanders and their troops. Unlike any other work on the Korean War, it provides both a clear panoramic overview and a sharply drawn "you were there" account of American troops in fierce combat against the North Korean and Chinese communist invaders. As Americans and North Koreans continue to face each other across the 38th Parallel, This Kind of War commemorates the past and offers vital lessons for the future.
T.R. Fehrenbach commanded Army units in Korea at platoon, company, and battalion levels. Fehrenbach lives in San Antonio, Texas.
“Immensely readable.”—New York Times


“A comprehensive and impressively written history of the Korean War.”—Washington Post


“The lesson of the Korean War as it has not yet been told by anyone . . . terse, machine-gun bursts of common sense.”—Life magazine


“This Kind of War has been studied by two generations of soldiers. Fehrenbach describes good decisions and bad ones with insight and expertise. But what he does best of all, and what is so memorable, is his eloquent, sometimes painful description of the GIs who must bear the burden of those decisions. That is the awful beauty of this book—it cuts straight to the heart of all the political and military errors, and reveals the brave souls who have to bleed and die for mistakes made. A timely reissue of a military classic.”—Gen. Colin L. Powell