The Secret of the Hidden Scrolls: The Complete Series (Paperback) 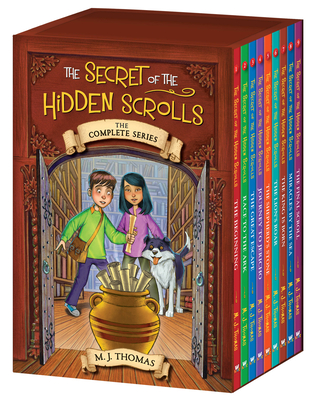 The Secret of the Hidden Scrolls: The Complete Series (Paperback)


In stock at publisher: Usually Ships to store in 3-5 Business Days.
The Secret of the Hidden Scrolls is an adventure-packed chapter book series for readers ages six to nine. The series follows siblings Peter and Mary and their dog, Hank, as they discover ancient scrolls that transport them back to key moments in biblical history. There they find a world filled with wonder, adventure, and danger. They must search for clues to solve the secret of the scrolls . . . or they will be stuck in time forever.

The books include a rich cast of supporting characters, including Great-Uncle Solomon, the eccentric archaeologist who discovered the scrolls; the angel Michael, who guides the children on their quests; and key figures from the Bible stories.

Mike Thomas grew up in Florida playing sports and riding his bike to the library and an arcade named the Cosmic Cowboy. He graduated from Liberty University, earning a bachelor's degree in Bible Studies. When his son Peter was nine years old, Mike went searching for books that would teach Peter about the Bible in a fun, imaginative way. Finding none, he decided to write his own series. Mike Thomas lives in Murfreesboro, Tennessee, with his wife, Lori; sons Payton and Peter; and their dog, Hank.