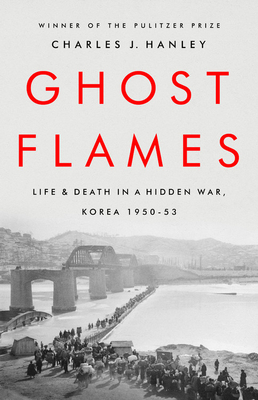 
Email or call for price.
A powerful, character-driven narrative of the Korean War from the Pulitzer Prize-winning writer who helped uncover some of its longest-held and darkest secrets.
The war that broke out in Korea on a Sunday morning seventy years ago has come to be recognized as a critical turning point in modern history -- as the first great clash of arms of the Cold War, the last conflict between superpowers, the root of a nuclear crisis that grips the world to this day.
In this vivid, emotionally compelling, and highly original account, Charles J. Hanley tells the story of the Korean War through the eyes of twenty individuals who lived through it--from a North Korean refugee girl to an American nun, a Chinese general to a black American prisoner of war, a British journalist to a U.S. Marine hero.
This is an intimate, deeper kind of history, whose meticulous research and rich detail, drawing on recently unearthed materials and eyewitness accounts, bring the true face of the Korean War, and the vastness of its human tragedy, into a sharper focus than ever before. The "forgotten war" becomes unforgettable.
Charles J. Hanley has reported from some 100 countries in his four-decade career at the Associated Press. His reporting on the No Gun Ri massacre of South Korean refugees in the hands of the U.S. military won him a Pulitzer Prize and Polk Award among other honors, and yielded his 2001 book, The Bridge at No Gun Ri. An expert on the Korean War, he regularly lectures and contributes scholarship on the conflict in academic journals. He lives in New York City.
"A masterly new history...the accretion of astounding detail makes for a vivid, multilayered look at a deeply complicated war in which few emerged as heroic. A top-notch addition to the literature on the Korean War."—Kirkus Reviews (starred)

"Hanley paints an extraordinary portrait of the war's complexity and devastation. This is an essential account of America's "forgotten war."—Publishers Weekly Starred Review

"In unforgettable fashion, Hanley, a Pulitzer Prize winner, tells the story of the Korean War, one of the most savage conflicts in history."—The New York Times Book Review

"Ghost Flames is a masterful, often brutal representation of the Korean War. Readers with a limited knowledge of the conflict will gain a deeper understanding of the complexities cast upon ordinary people, from the soldiers who fought to the civilians trying to escape. This historical account revitalizes old memories and provides an outlet for healing from the traumatic events suffered by the victims. It leaves the reader with the unmistakable realization that this unpopular war should not be forgotten."—Coffee or Die

“The book is a fast and engrossing haunting read that thoroughly educates while pulling on the heart strings.”—The New York Journal of Books

"Hanley's genius is to tell this remarkable story from the perspective of twenty very different participants--ranging from a general to a grunt, from a refugee to a p.o.w. By deep reportorial digging and gripping in-the-moment narration, he has woven together the saga--sometimes heroic, often disturbing--of an enigmatic war as it really was."—Evan Thomas, author of Sea of Thunder and Ike's Bluff

"The stories of twenty people who lived through the Korean War are told with such skill that I grew to care about every one of them. Ghost Flames is an unforgettable depiction of the effect of war on ordinary people, and a stunning achievement."—Linda Sue Park, NYTimes bestselling author and Newbery Medalist

"Charles Hanley has written a people's history of the Korean War, a fascinating, illuminating and highly readable work that opens a new window on the experiences of ordinary people in a critically important, but mostly unknown, war. His narrative is unflinching in recounting the war's horrors, the crimes by all sides. Readers will learn much that is entirely new."—Bruce Cumings, Swift Distinguished Service Professor of History, University of Chicago, author of The Korean War: A History

"Through the prism of twenty different lives - from a child, a solider, a journalist - Hanley gives us an immensely moving portrait of a war that has still not yet ended. With its unblinking and evocative storytelling of the experiences of those who often go nameless in American accounts of the war, Ghost Flames is unlike any other book on the Korean War. It is, in essence, a close and intimate story of the first US war of intervention in the Cold War era, one that forces us to examine the violent wake of wars the United States has generated since. Building from his previous award-winning journalism on civilian massacres committed by the US military, Hanley raises the urgent question of why the Korean War is forgotten in the United States and reveals the enormous costs that have come with this constant forgetting."—Monica Kim, Assistant Professor, Department of History New York University

PRAISE FOR THE BRIDGE AT NO GUN RI:"[A] truly heart-wrenching tale of survival and heroism...This is an inspiring book -- storytelling at its very, very best. Read it."
--Doug Stanton, author of In Harm's Way

"[I]n a class to stand with such work as Hersey's Hiroshima and Keneally's Schindler's List...Powerful history."--Sydney Schanberg, Pulitzer Prize-winning journalist and author of The Death and Life of Dith Pran, basis of the film The Killing Fields

"This account, expanded from their Pulitzer Prize-winning reportage, raises questions about military preparedness and civilian involvement that are as relevant today as they were a half a century ago."--The New Yorker