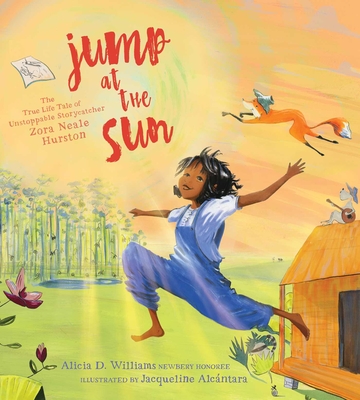 
On Our Shelves Now
From the Newbery Honor–winning author of Genesis Begins Again comes a shimmering picture book that shines the light on Zora Neale Hurston, the extraordinary writer and storycatcher extraordinaire who changed the face of American literature.

Zora was a girl who hankered for tales like bees for honey. Now, her mama always told her that if she wanted something, “to jump at de sun”, because even though you might not land quite that high, at least you’d get off the ground. So Zora jumped from place to place, from the porch of the general store where she listened to folktales, to Howard University, to Harlem. And everywhere she jumped, she shined sunlight on the tales most people hadn’t been bothered to listen to until Zora. The tales no one had written down until Zora. Tales on a whole culture of literature overlooked…until Zora. Until Zora jumped.
Alicia D. Williams is the author of Genesis Begins Again, which received a Newbery and Kirkus Prize honors, was a William C. Morris Award finalist, and for which she won the Coretta Scott King - John Steptoe Award for New Talent; and picture books Jump at the Sun and The Talk. A graduate of the MFA program at Hamline University, and an oral storyteller in the African American tradition, she is also a teacher in Charlotte, North Carolina.

Jacqueline Alcántara is the illustrator of the critically acclaimed The Field and Freedom Soup. Her favorite days are spent drawing, painting, writing, and walking her dog. In 2016, she was awarded the inaugural We Need Diverse Books Illustrator mentorship. Find out more at JacquelineAlcantara.com.
*"A lively, joyfully rendered portrait of a literary legend."
— Publisher Weekly, starred review

* “Williams’ narration is a readaloud dream….it will be a joyful guide for folklore enthusiasts”
— BCCB, starred review