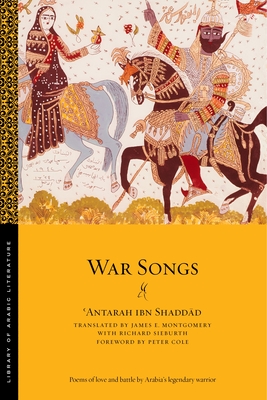 This is book number 41 in the Library of Arabic Literature series.

Poems of love and battle by Arabia's legendary warrior

From the sixth-century highlands of Najd in the Arabian peninsula, on the eve of the advent of Islam, come the strident cries of a legendary warrior and poet. The black outcast son of an Arab father and an Ethiopian slave mother, 'Antarah ibn Shaddad struggled to win the recognition of his father and tribe. He defied social norms and, despite his outcast status, loyally defended his people. 'Antarah captured his tumultuous life in uncompromising poetry that combines flashes of tenderness with blood-curdling violence. His war songs are testaments to his life-long battle to win the recognition of his people and the hand of 'Ablah, the free-born woman he loved but who was denied him by her family. War Songs presents the poetry attributed to 'Antarah and includes a selection of poems taken from the later Epic of 'Antar, a popular story-cycle that continues to captivate and charm Arab audiences to this day with tales of its hero's titanic feats of strength and endurance. 'Antarah's voice resonates here, for the first time in vibrant, contemporary English, intoning its eternal truths: commitment to one's beliefs, loyalty to kith and kin, and fidelity in love. An English-only edition.
ʿAntarah ibn Shaddād (Author) ʿAntarah ibn Shaddād was one of the most famous warrior-poets of pre-Islamic Arabia. A semi-legendary hero from the sixth century AD, ʿAntarah was born into slavery as the son of an Arab father and an African mother. Many of his poems are about his love for ʿAblah, daughter of the tribe's shaykh--a love thwarted by his low social status. Peter Cole (Foreword by) Peter Cole has published several books of poems and many volumes of translations from Hebrew and Arabic, both medieval and modern. He has received numerous honors for his work, including a Guggenheim Fellowship and an American Academy of Arts and Letters Award in Literature, and in 2007 he was named a MacArthur Fellow. James E. Montgomery (Translator) James E. Montgomery, author of Al-Jāḥiẓ: In Praise of Books, is Sir Thomas Adams's Professor of Arabic at the University of Cambridge and Fellow of Trinity Hall. His latest publications are Loss Sings, a collaboration with the celebrated Scottish artist Alison Watt, and Dīwān ʿAntarah ibn Shaddād: A Literary-Historical Study.