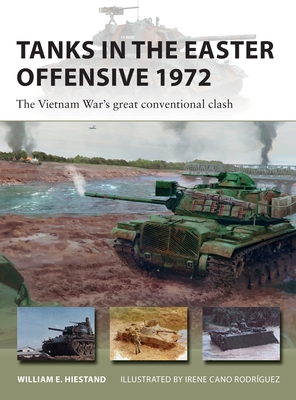 This study explains how the armies of North and South Vietnam, newly equipped with the most modern Soviet and US tanks and weaponry, fought the decisive armored battles of the Easter Offensive.

Wearied by years of fighting against Viet Cong guerillas and North Vietnamese regulars, the United States had almost completely withdrawn its forces from Vietnam by early 1972. Determined to halt the expansion and improvement of South Vietnamese forces under the U.S. “Vietnamization” program, North Vietnam launched a major fourteen-division attack in March 1972 against the South that became known as the “Easter Offensive.” Hanoi's assault was spearheaded by 1,200 tanks and was counteracted on the opposite side by Saigon's newly equipped armored force using U.S. medium tanks. The result was ferocious fighting between major Cold War-era U.S. and Soviet tanks and mechanized equipment, pitting M-48 medium and M-41 light tanks against their T- 54 and PT-76 rivals in a variety of combat environments ranging from dense jungle to urban terrain. Both sides employed cutting-edge weaponry for the first time, including the U.S. TOW and Soviet 9M14 Malyutk wire-guided anti-tank missiles.

This volume examines the tanks, armored forces, and weapons that clashed in this little-known campaign in detail, using after-action reports from the battlefield and other primary sources to analyze the technical and organizational factors that shaped the outcome. Despite the ARVN's defensive success in October 1972, North Vietnam massively expanded its armor forces over the next two years while U.S. support waned. This imbalance with key strategic misjudgments by the South Vietnamese President led to the stunning defeat of the South in 1975 when T54 tanks crashed through the fence surrounding the Presidential palace and took Saigon on April 30, 1975.

William E. Hiestand was born in 1957, and has worked for over 30 years as a US Department of Defense analyst focusing on military issues. He has served in a wide variety of analytic, leadership, and representational roles. He holds an MA in History from Cornell University, and has a lifelong interest in military history, with a particular focus on 20th-century armored and mechanized operations and Soviet military history. He lives in Virginia near Washington DC.

Irene Cano Rodríguez (known as Araire) is a freelance artist working and living in Spain. Since 2014, she has worked as a specialized historical illustrator, recreating historical scenes for museums, studios, editorials and magazines. Nowadays she also combines her work as an illustrator with teaching archaeological illustration.