Pilgrim Days: A Lifetime of Soldiering from Vietnam to the SAS (Hardcover) 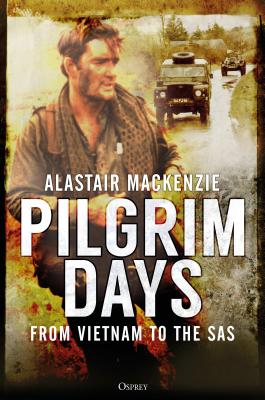 Pilgrim Days: A Lifetime of Soldiering from Vietnam to the SAS (Hardcover)

'We are the Pilgrims, master; we shall go, Always a little further; it may be, Beyond that last blue mountain barred with snow.'

If there was ever anyone who went a little further, a little beyond, it was Alastair MacKenzie. In a career spanning 30 years, MacKenzie served uniquely with the New Zealand Army in Vietnam, the British Parachute Regiment, the British Special Air Service (SAS), the South African Defense Force's famed ParaBats, the Sultan of Oman's Special Forces, and a host of private security agencies and defense contractors.

MacKenzie lived the soldier's life to the full as he journeyed "the Golden Road to Samarkand." This extraordinary new work from the author of Special Force: The Untold Story of 22nd Special Air Service Regiment (SAS) vividly documents, in a detail that stuns, the experience of infantry combat in Vietnam, life with the Paras, the tempo of selection for UK Special Forces, covert SAS operations in South Armagh and SAS Counter Terrorist training on the UK mainland, vehicle-mounted Pathfinder Brigade insertions into Angola, and maritime counter-terrorism work in Oman.

Alastair MacKenzie comes from a military family of long standing and he served as a para-trained platoon commander for 12 months with the New Zealand infantry on combat operations in South Vietnam and in the special forces of South Africa, Oman and the UK, where for four years he was troop commander in the 22nd Special Air Service Regiment. After his retirement as a full-time Army officer he enjoyed a successful commercial career with Royal Ordnance and British Aerospace before moving to consultancy roles. In civilian life he retained an involvement with the Territorial Army as an SAS officer and retired with the rank of lieutenant colonel in 2001. He obtained his PhD in politics in 2005 and is the author of works including Special Force: The Untold Story of 22nd Special Air Service Regiment (SAS) and The Sounds Soldiers' Memorial – Stories of the Fallen. He lives on the South Island of New Zealand.
"Nicely illustrated with a special section of photographs, "Pilgrim Days: From Vietnam to the SAS" is an impressively written, exceptionally informative, and inherently riveting read that is unreservedly recommended for both community and academic library Military History & Biography collections." - Midwest Book Review