Over and Under the Snow (Paperback) 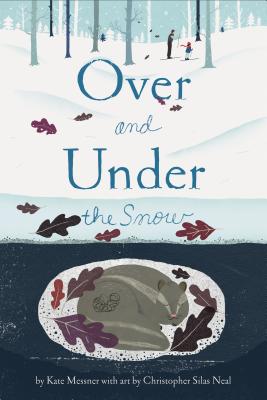 Over and Under the Snow (Paperback)


In stock at publisher: Usually Ships to store in 3-5 Business Days.
Over the snow, the world is hushed and white. But under the snow lies a secret world of squirrels and snow hares, bears and bullfrogs, and many other animals making their winter home under the snow. This beloved nonfiction picture book exploring the subnivean zone reveals the tunnels and caves formed beneath the snow but over the ground, where many kinds of animals live through the winter, safe and warm, awake and busy, but hidden beneath the snow.
Kate Messner is a middle school teacher and the author of several books for young readers, including the Sea Monster series. She is the recipient of an E. B. White Read Aloud Award, and she lives on Lake Champlain.

Christopher Silas Neal is an award-winning illustrator and author who regularly contributes to the New York Times, The New Yorker, and creates book covers for various publishers. He has directed short animated videos for Kate Spade and Anthropologie and was awarded a medal from the Society of Illustrators for his work in motion graphics.

He illustrated the acclaimed picture books Over and Under the Snow and Lifetime, both of which explore the natural world. Over and Under the Snow, with author Kate Messner was praised for its "stunning retro-style illustrations" (New York Times), was a 2011 New York Times Editor's Choice and won an E.B. White Honor Award in 2012. He recently contributed art to New York Times Best Seller, Goodnight Songs a collection of poems by author of Goodnight Moon, Margaret Wise Brown. Neal's self-authored book debut "Everyone" will be published by Candlewick press in 2015.

He exhibits drawings at galleries and speaks at events around the world. He currently works and lives in Brooklyn and teaches Illustration at Pratt Institute.