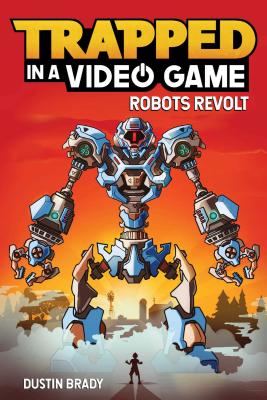 This is book number 3 in the Trapped in a Video Game series.

Kids who love video games will love this third installment of the new 5-book series about 12-year old Jesse Rigsby and the wild adventures he encounters inside different video games.

The robots are here and they're not happy, at all. After accidentally releasing the robot villains from Super Bot World 3 into the real world, Jesse Rigsby's got to figure out a way to make everything right before anyone gets hurt. He'd usually rely on his friend Eric to help him with this sort of thing, but he's gone missing.

To find Eric, Jesse will have to survive rickety mine carts, sewer piranhas, mysterious men in suits, and a 100-foot-tall robot named Goliatron. This is Jesse's most dangerous adventure yet because this time the video game is real. And in the real world, there are no extra lives.
Dustin Brady writes funny, action-packed books for kids. Although he regularly gets locked out of his own accounts for forgetting passwords, Dustin still remembers the Super Mario Bros. 3 game genie code for infinite lives. It’s SLXPLOVS. Dustin lives in Cleveland, Ohio, with his wife, kids, and a small dog named Nugget.