Trapped in a Video Game (Paperback) 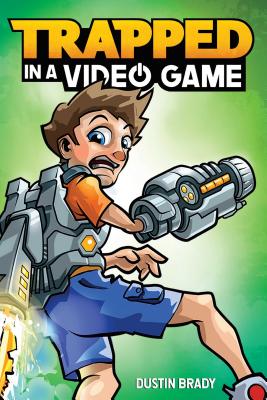 Trapped in a Video Game (Paperback)

This is book number 1 in the Trapped in a Video Game series.

Kids who love video games will love this first installment of the new 5-book series about 12-year old Jesse Rigsby and the wild adventures he encounters inside different video games.

Jesse Rigsby hates video games—and for good reason. You see, a video game character is trying to kill him. After getting sucked in the new game Full Blast with his friend Eric, Jesse starts to see the appeal of vaporizing man-size praying mantis while cruising around by jet pack. But pretty soon, a mysterious figure begins following Eric and Jesse, and they discover they can't leave the game. If they don't figure out what's going on fast, they'll be trapped for good!
Dustin Brady writes funny, action-packed books for kids. Although he regularly gets locked out of his own accounts for forgetting passwords, Dustin still remembers the Super Mario Bros. 3 Game Genie code for infinite lives. It’s SLXPLOVS. Dustin lives in Cleveland, Ohio, with his wife, kids, and a small dog named Nugget.