The Lost Stone (The Kingdom of Wrenly #1) (Paperback) 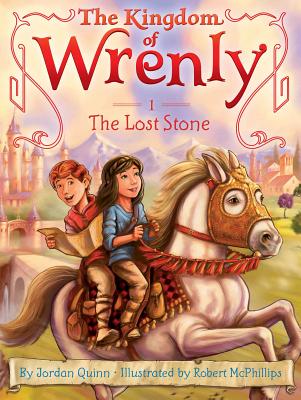 The Lost Stone (The Kingdom of Wrenly #1) (Paperback)

This is book number 1 in the The Kingdom of Wrenly series.

Welcome to the Kingdom of Wrenly—a new chapter book series full of fantasy and adventure.

Meet Lucas, the eight year-old prince, and Clara, the daughter of the queen’s seamstress. Lucas is an only child who longs to make friends and go on adventures. Clara knows the kingdom well, so she and Lucas team up and explore the lands of Wrenly!

In The Lost Stone, Lucas and Clara search for Queen Tasha’s missing emerald. On their exciting adventure, they travel to all the main attractions of Wrenly: Primlox (the island of fairies), Burth (the island of trolls), Crestwood (the island of dragons), Hobsgrove (the island of wizards), and the beautiful Mermaid’s Cove. King Caleb has promised to reward the person who finds the precious stone, and Lucas and Clara are determined to search the entire kingdom until they find it!

With easy-to-read language and illustrations on almost every page, The Kingdom of Wrenly chapter books are perfect for beginning readers.
Jordan Quinn grew up in a fairy tale castle in England. It had a spiral stone staircase, a moat, and a dungeon. As a child she liked to play hide-and-go-seek and ride her beloved horse, Prince Charming. When she wasn’t riding, she wrote stories about fairies, trolls, dragons, and wizards. Today, Jordan lives on a ranch in California with her husband, son, and a golden retriever named Sir Toots-a-Lot.

Robert McPhillips has been involved in a wide variety of projects over the years—from illustrating greeting cards to animation, though he especially loves illustrating children’s books. Robert makes his home in North Devon, England, with his wife, Sam.