How to Train with a T. Rex and Win 8 Gold Medals (Hardcover) 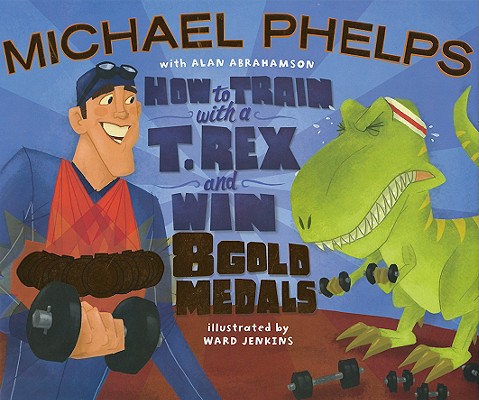 How to Train with a T. Rex and Win 8 Gold Medals (Hardcover)


In stock at publisher: Usually Ships to store in 3-5 Business Days.
What does it take to win eight gold medals?

Eating enough broccoli to fill the back of a pickup truck?

Swimming the length of the Great Wall of China three times?
Michael Phelps is an American swimmer.  He holds the record for winning the most gold medals (8) in a single Olympics (2008).  He has won 16 Olympic medals, 14 gold and two bronze.  He holds seven world records and has over 20 World Championship medals. After returning home from Beijing in 2008, Michael used the well-publicized $1 million dollar Speedo bonus to start the Michael Phelps Foundation through which he hopes to encourage children to lead healthy, active lives, and to continue to grow the sport of swimming.  He now resides in Baltimore, MD with his dog Herman.

Ward Jenkins is and illustrator and animator from Atlanta, Georgia. He’s illustrated several picture books, including Chicks Run Wild, as well as the Good Crooks chapter book series. Ward lives with his wife and two kids and hasn’t shaved his beard since 2010. Find him online at @WardOMatic.

Alan Abrahamson is an award-winning sportswriter and a recognized authority on the Olympics. In 2006, he left the Los Angeles Times, where he had been a staff writer for 17 years, to write for the NBC suite of online properties, which now includes NBCOlympics.com, NBCSports.com and UniversalSports.com. Since 2003, Alan has also served as a sports and Olympic analyst on NBC's television networks. Among other honors, Alan won the 2002 National Headliner Award for sports writing and was named the Los Angeles Press Club's 2004 sports journalist of the year. Alan and his wife, Laura, and their three children live in Southern California.