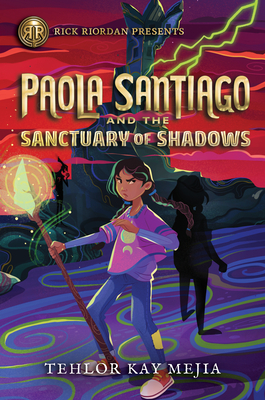 "Paola Santiago is a whip-smart Latina who dares to explore the shadows between folklore and middle-school friendship. A thrilling adventure."--Nina Moreno, author of Don't Date Rosa Santos

Paola Santiago has recently returned from Oregon, where she defeated the Hitchhiker ghost and saved her father from the vengeful spirit that was possessing him. The poor girl deserves a rest! But first she has to rescue Dante from the void, where he’s been imprisoned by some unknown force. Even though Dante has turned against Pao, she can’t just leave him there--they’ve been friends for too long.

Paola’s prophetic dreams seem to have dried up, so she has to find other ways to locate a new rift where she can enter the void. Signs point to Texas--but how is she going to get there from Arizona? It just so happens that Emma’s new group of politically active friends, the Rainbow Rogues, are planning a field trip to San Antonio. It’s the perfect ruse for Paola, if she can stand being with the judgmental girls for that many days. . . .

Relying on her wits, training from the Ninos de la Luz, and the emotional support of her best friend Emma, Pao makes it into the void. Once there she must face down not just one but two enemies: El Cucuy, the bogeyman . . . and someone even scarier who looks a lot like Pao herself.

Tehlor Kay Mejia's third exciting journey into Mexican folklore has our lovable, intrepid protagonist making discoveries both wondrous and fearsome. Presented by Rick Riordan, author of Percy Jackson, soon to be a series on Disney+.

Tehlor Kay Mejia is an Oregon native in love with the alpine meadows and evergreen forests of her home state, where she lives with her daughter. She is the author of three middle grade titles about Paola Santiago: Paola Santiago and the River of Tears, Paola Santiago and the Forest of Nightmares, and Paola Santiago and the Sanctuary of Shadows. Her short fiction appears in the All Out and Toil & Trouble anthologies from Harlequin Teen and The Cursed Carnival and Other Calamities from Rick Riordan Presents. She has also written two highly acclaimed YA novels, We Set the Dark on Fire and We Unleash the Merciless Storm. When she's not writing, you can find her plucking at her guitar, stealing rosemary sprigs from overgrown gardens, or trying to make the perfect vegan tamale. Follow her on Instagram @tehlorkay.