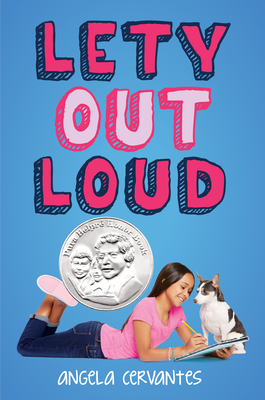 This a good book for animal-lovers. The title tells us that probably a girl named Lety is going to do something that makes her shine. Lety just wants to write animal profiles at the shelter. Lety’s family speaks Spanish, so animal-lovers AND Spanish learners could really like this book. Unfortunately, a boy named Hunter also signed up for the job. So they have a contest that Lety isn’t sure about. The genre is realistic fiction, and it takes place in America (I don’t know where). It was sort of happy. I like when somebody gets a dog in the end.

“One of the most difficult things a kid faces is feeling confident enough to do something new and challenging. It’s made that much harder when English isn’t your first language and you, like our main character, Lety, are challenged to write fantastic descriptions for shelter animals. Lety Out Loud is a book about succeeding when things are tough and making a space for yourself when you’re in a new place. And it’s a book about loving dogs, which means it’s practically a perfect book!”
— Melissa Fox, Watermark Books & Cafe, Wichita, KS

Celebrated author Angela Cervantes returns to the fan favorite animal shelter featured in Gaby, Lost and Found, with a heartfelt novel about friendship and finding your voice.
Can Lety find her voice before it's too late?

Lety Muñoz's first language is Spanish, and she likes to take her time putting her words together. She loves volunteering at the Furry Friends Animal Shelter because the dogs and cats there don't care if she can't always find the right word.

When the shelter needs a volunteer to write animal profiles, Lety jumps at the chance. But grumpy classmate Hunter also wants to write profiles -- so now they have to work as a team. Hunter's not much of a team player, though. He devises a secret competition to decide who will be the official shelter scribe. Whoever helps get their animals adopted the fastest wins. The loser scoops dog food.

Lety reluctantly agrees, but she's worried that if the shelter finds out about the contest, they'll kick her out of the volunteer program. Then she'll never be able to adopt Spike, her favorite dog at the shelter!

Angela Cervantes is a poet, storyteller, and animal lover. Her poetry and short stories have appeared in various publications, and she has written the novels Gaby, Lost and Found and Allie, First at Last. When Angela is not writing, she enjoys hanging out with her husband in Kansas and eating fish tacos every chance she gets. Keep up with Angela at angelacervantes.com.

Praise for Allie, First at Last:

"Laced with Mexican-American language and culture, this realistic drama is filled with gentle humor, big lessons, and even bigger heart." -- Publishers Weekly


Praise for Gaby, Lost and Found: