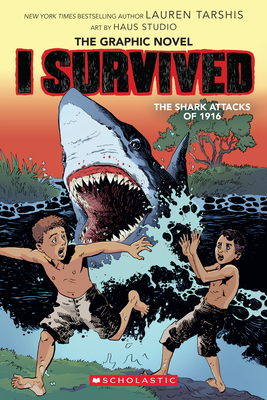 This is book number 2 in the I Survived Graphic Novels series.

A thrilling graphic novel adaptation of Lauren Tarshis's bestselling I Survived the Shark Attacks of 1916, with text adapted by Georgia Ball and art by Haus Studio!
Chet Roscow is finally feeling at home in his uncle's little New Jersey town. He has three new friends, and they love cooling off in the creek on hot summer days.

But then comes shocking news: A massive shark has been attacking swimmers in the ocean along the Jersey Shore, not far from where Chet is staying. Fear is in the air.

So when Chet spots a gray fin in the creek, he's sure it's his imagination running wild. It's impossible he's about to come face-to-face with a killer shark... right?

Based on the real life events of the Jersey Shore shark attacks of 1916, this graphic novel brings Lauren Tarshis's New York Times bestselling I Survived series to vivid life. Perfect for readers who prefer the graphic novel format, or for existing fans of the I Survived chapter book series, these graphic novels combine historical facts with high-action storytelling that's sure to keep any reader turning the pages. Includes a nonfiction section at the back with historical photos and facts about the real-life shark attacks.

Lauren Tarshis's New York Times bestselling I Survived series tells stories of young people and their resilience and strength in the midst of unimaginable disasters and times of turmoil. Lauren has brought her signature warmth and exhaustive research to topics such as the battle of D-Day, the American Revolution, Hurricane Katrina, the bombing of Pearl Harbor, and other world events. She lives in Connecticut with her family, and can be found online at laurentarshis.com.

Praise forI Survived the Sinking of the Titanic, 1912: The Graphic Novel:

"The first installment of Tarshis' sprawling prose disaster oeuvre for young readers is reimagined in visually interesting full-color comic panels that support its recognizable thrilling pace and convenient twists. Many of the most exciting scenes are largely wordless, spotlighting the propulsive action amid growing tensions. A fresh and interesting adaptation, making for an easy crowd pleaser." -- Kirkus Reviews

Praise for I Survived the American Revolution, 1776:

Praise for I Survived the Destruction of Pompeii, AD 79:

"Tarshis serves up another gripping adventure... with the light-speed pacing and death-defying maneuvering fans have come to expect." -- Booklist

Praise for I Survived the Battle of Gettysburg, 1863:

Praise for I Survived Hurricane Katrina, 2005:

"Expressive illustrations capture the drama of the storm and its aftermath, but the book's real power comes from its exploration of what it means to be a hero." -- Booklist

Praise for I Survived the Shark Attacks of 1916:

"A gripping story that will hold the interest of reluctant readers." -- School Library Journal

Praise for I Survived the Sinking of the Titanic, 1912: