The Unexpected Spy: From the CIA to the FBI, My Secret Life Taking Down Some of the World's Most Notorious Terrorists (Paperback) 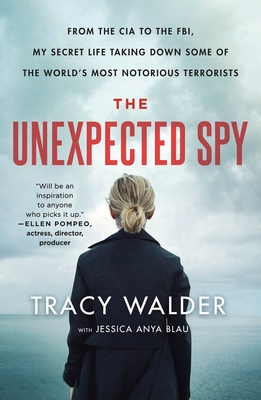 The Unexpected Spy: From the CIA to the FBI, My Secret Life Taking Down Some of the World's Most Notorious Terrorists (Paperback)

A highly entertaining account of a young woman who went straight from her college sorority to the CIA, where she hunted terrorists and WMDs

"Reads like the show bible for Homeland only her story is real." —Alison Stewart, WNYC

When Tracy Walder enrolled at the University of Southern California, she never thought that one day she would offer her pink beanbag chair in the Delta Gamma house to a CIA recruiter, or that she’d fly to the Middle East under an alias identity.

The Unexpected Spy is the riveting story of Walder's tenure in the CIA and, later, the FBI. In high-security, steel-walled rooms in Virginia, Walder watched al-Qaeda members with drones as President Bush looked over her shoulder and CIA Director George Tenet brought her donuts. She tracked chemical terrorists and searched the world for Weapons of Mass Destruction. She created a chemical terror chart that someone in the White House altered to convey information she did not have or believe, leading to the Iraq invasion. Driven to stop terrorism, Walder debriefed terrorists—men who swore they’d never speak to a woman—until they gave her leads. She followed trails through North Africa, Europe, and the Middle East, shutting down multiple chemical attacks.

Then Walder moved to the FBI, where she worked in counterintelligence. In a single year, she helped take down one of the most notorious foreign spies ever caught on American soil. Catching the bad guys wasn’t a problem in the FBI, but rampant sexism was. Walder left the FBI to teach young women, encouraging them to find a place in the FBI, CIA, State Department or the Senate—and thus change the world.

Tracy Walder is a former Staff Operations Officer (SOO) at the CIA's Counterterrorism Center and a Special Agent at the FBI's Los Angeles Field Office specializing in Chinese counterintelligence operations. She now teaches global terrorism at the all-girls Ursuline Academy in Dallas and is an adjunct professor of Domestic Terrorism and Criminal Justice at Texas Christian University in Ft. Worth. She is on the Board of Directors for Girl Security, a non profit, non partisan group that brings national security curriculum to girls in high school throughout the US.

"Absorbing, if often frustrating, given the macho, male-dominant culture prevalent within the Bureau. Readers of memoirs, current events and U.S. history are all sure to enjoy The Unexpected Spy." —Shelf Awareness

"Walder has been able to accomplish more than most people do in a lifetime... [A] tale of a woman whose mission was to help make America great." —USC Annenberg Media

"[Walder] is really not what you would expect... Incredible book." —Heather McDonald, Juicy Scoop

"This book is a nice reminder that far beneath today’s news headlines, there is a quiet cadre of ethical, hard-working and dedicated patriots working to keep us safe." —Lee Woodruff

"Walder's candid story will connect with readers curious about counterterrorism work and seeking an inspirational account of a woman seeking to change the balance of power in not only a male-dominated field but the world." —Library Journal

"A well-written, engaging memoir, a serious and candid inside view of two enigmatic and significant institutions from a woman's perspective.'" —Booklist

"Tracy Walder's The Unexpected Spy is an engaging and thoughtful story of service that will inspire generations of young women to come. Tracy's story is particularly moving because it provides a candid but often untold account of the challenges of serving one's nation amid tumultuous times. As a woman in national security, Tracy offers a glimpse into the rewards and risks of actualizing a dream in a male-dominated space." —Lauren Bean Buitta, Founder, Girl Security

"Walder brings a you-are-there intimacy to her accounts. Often, the youngest person in the room and one of few females... [She] was certainly there when history was made." —Kirkus Reviews

"Wow! I thoroughly enjoyed Tracy Walder's unique perspective; it will be inspiring to so many, especially young women with an interest in national security. I couldn't help but compare it to some of my own experiences in the CIA, particularly her exhaustion working counterterrorism, her sense of betrayal in war time, and her feelings of responsibility after a large-scale attack. I admire Walder's ability to channel those challenges into a positive force. A force for change." —Sarah M. Carlson, Former CIA officer and author of In The Dark Of War

"The Unexpected Spy will get wide attention, and deserves it. It will give readers a different, more vivid, and more human idea of the actual work of spying, counter-intelligence, and dealing with terrorism. It will be especially important to young women who are considering this kind of career." —James Fallows at The Atlantic, author of Blind Into Baghdad

"Tracy Walder has a unique combination of immense courage along with compassion and humanity... This book will be an inspiration to anyone who picks it up." —Ellen Pompeo, actress, director, producer

"A compelling and well-written memoir that takes the reader on a journey from the CIA's 'Farm' and its 'black sites' to the FBI's training academy" —Peter Bergen, author of Manhunt: The Ten-Year Search for bin Laden from 9/11 to Abbottabad

"Tracy Walder is an exceptionally gifted individual." —The Jerusalum Post


Named one of the 10 Books Celebrities Love by E! News.