Watching Darkness Fall: FDR, His Ambassadors, and the Rise of Adolf Hitler (Hardcover) 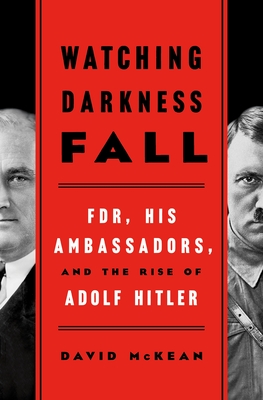 Watching Darkness Fall: FDR, His Ambassadors, and the Rise of Adolf Hitler (Hardcover)

As German tanks rolled toward Paris in late May 1940, the U.S. Ambassador to France, William Bullitt, was determined to stay put, holed up in the Chateau St. Firmin in Chantilly, his country residence. Bullitt told the president that he would neither evacuate the embassy nor his chateau, an eighteenth Renaissance manse with a wine cellar of over 18,000 bottles, even though “we have only two revolvers in this entire mission with only forty bullets.”

As German forces closed in on the French capital, Bullitt wrote the president, “In case I should get blown up before I see you again, I want you to know that it has been marvelous to work for you.” As the fighting raged in France, across the English Channel, Ambassador to Great Britain Joseph P. Kennedy wrote to his wife Rose, “The situation is more than critical. It means a terrible finish for the allies.”

David McKean's Watching Darkness Fall will recount the rise of the Third Reich in Germany and the road to war from the perspective of four American diplomats in Europe who witnessed it firsthand: Joseph Kennedy, William Dodd, Breckinridge Long, and William Bullitt, who all served in key Western European capitals—London, Berlin, Rome, Paris, and Moscow—in the years prior to World War II. In many ways they were America’s first line of defense and they often communicated with the president directly, as Roosevelt's eyes and ears on the ground. Unfortunately, most of them underestimated the power and resolve of Adolf Hitler and Germany’s Third Reich.

Watching Darkness Fall is a gripping new history of the years leading up to and the beginning of WWII in Europe told through the lives of five well-educated and mostly wealthy men all vying for the attention of the man in the Oval Office.

David McKean is the former US Ambassador to Luxembourg, and former director of Policy Planning for the US Department of State. He is currently a Senior Fellow at The German Marshall Fund of the United States in Washington, D.C.

"David McKean’s superbly readable chronicle of FDR and his ambassadors offers new insight on modern history’s greatest tragedy: The rise of Hitler and the Nazis . . . . Watching Darkness Fall is one of those works that by illuminating the shadows makes a familiar story all the more powerful. A must for the bookshelf of anyone fascinated by World War II history."
—David Ignatius, columnist, The Washington Post

"In Watching Darkness Fall, David McKean has produced a compelling portrait of the men President Franklin Roosevelt chose to be his ambassadors in Europe during Nazi Germany’s march toward war. . . . The story of the envoys’ rivalries and competition for FDR’s favor is a fascinating one, as is Roosevelt’s reaction to their differing advice, reflecting his own struggle over how to handle the looming war and America’s role in it."
—Lynne Olson, New York Times bestselling author of Madame Fourcade's Secret War

"High drama, diplomatic intrigue, and damn good chinwag . . . David McKean has a fine eye for the telling anecdote in this gracefully written group biography of FDR’s pre-war ambassadors. Watching Darkness Fall is colorful biography but also an important piece of diplomatic history—and along the way, we learn a little more about the ever-elusive Franklin Roosevelt."
—Kai Bird, Pulitzer Prize-winning historian, director of the Leon Levy Center for Biography, and author of The Outlier: The Unfinished Presidency of Jimmy Carter

“David McKean has written a bracing, important book about a tragic period in Transatlantic history. Watching Darkness Fall is part diplomatic history, part political thriller. The path to the united effort to defeat fascism was full of roads not taken, and this book provides a very helpful map.”
—David Miliband, President and CEO of the International Rescue Committee, and former Foreign Secretary of the United Kingdom

"A lively, immersive history of a pivotal time." —Publishers Weekly

“Broad ranging . . . of considerable interest to students of modern history and the Roosevelt history.” —Kirkus Reviews

“David McKean had the good idea of tracking America’s response to Germany’s rise by describing the milieu of America’s ambassadors and by assessing the policies they pursued and the actions they took . . . . [he] tells his story easily and well, keeping the chapters brief and sprinkling them with telling quotes...Mr. McKean also has a sharp eye for detail beyond diplomacy.” —Wall Street Journal

"Felicitously written with an insider’s sensibility for international affairs . . . will delight both specialists and generalists." —Library Journal (starred review)

"McKean — a veteran of presidential campaigns as well as a keen student of history — writes with the insights of someone who’s been in the room and knows how personalities and idiosyncrasies shape the conduct of policy." —The Providence Journal

"In new book Watching Darkness Fall, former US ambassador David McKean illustrates how antisemitism, apathy, and internal politics set America back in the war against Germany." —Times of Israel