Approaching You in English (Paperback) 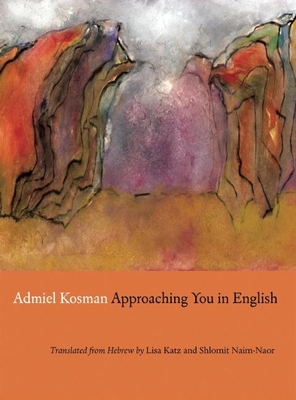 Approaching You in English (Paperback)

Verses to be added to the end of Deuteronomy

Are you kidding, let it be,
just write that we were born, we were here,
and we drowned in the sea.
That's enough. Keep the final verses
short, in your generosity, just hint that it's bad here,
without love, in the desert, the old people grumbling,
even dying all the way here,
a long journey and contention.

Write concisely about murder and blood,
just hint at a people and a homeland,
keep it short, in your generosity (let it be),
and remind the reader
that we drowned in the sea.

Admiel Kosman is one of Israel's most prominent contemporary poets, with eight books of poetry to his credit, and several more of prose. His work evokes multiple tensions between prayer and modern life, sacred texts and eroticism, war and peace, language and translation. After teaching at Bar Ilan University in Israel for many years, Kosman moved permanently to Berlin, where he is now professor of religious studies at Potsdam University and heads the first Reform rabbinical college in Germany to resume operations after the Holocaust.

Lisa Katz is the author of Reconstruction (Am Oved) and the translator of Look There: New and Selected Poems of Agi Mishol (Graywolf Press). Her poems, translations, essays, and reviews have appeared in scores of publications, and she is the translation coordinator for the Jerusalem International Poetry Festival. In 2008, she won the Mississippi Review Poetry Prize. She teaches at the Hebrew University of Jerusalem, and frequently lectures abroad.

Shlomit Naor, born in Raanana, Israel, in 1974, is an educator and published poet. She holds an MA in creative writing from Ben Gurion University and a BA in philosophy and literature from the Hebrew University in Jerusalem.

Born in Israel in 1957 to an observant Orthodox Jewish family; he was sent to Orthodox schools, then served in the army, studied at the Bezalel art college, and received a PhD in Talmud, the interpretation of Jewish law, ethics, customs, and history. After teaching at Bar Ilan University for many years, Kosman moved permanently to Berlin, where he is The author of Reconstruction (Am Oved), and the translator of Look There: New and Selected Poems of Agi Mishol (Graywolf). She teaches at the Hebrew University of Jerusalem. Holds degrees in philosophy and Hebrew literature from Hebrew University; she is an MA candidate in Creative Writing at Ben Gurion University and has worked in Jewish education for more than a decade.