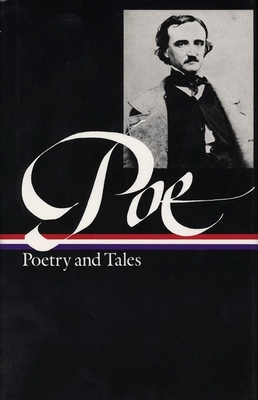 This is book number 1 in the Library of America Edgar Allan Poe Edition series.

In this complete and uniquely authoritative Library of America collection, Edgar Allan Poe's well-known tales of "mystery and imagination" and his best-known verse are collected with early poems, rarely published stories and humorous sketches, and the ecstatic prose poem Eureka.

Poe's poetry is famous both for the musicality of "To Helen" and "The City in the Sea" and for the hypnotic, incantatory rhythms of "The Raven" and "Ulalume." "The Fall of the House of Usher" and "The Cask of Amontillado" show his mastery of Gothic horror; "The Pit and the Pendulum" is a classic of terror and suspense. Poe invented the modern detective story in "The Murders in the Rue Morgue," and developed the form of science fiction that was to influence, among others, Jules Verne and Thomas Pynchon. Poe was also adept at the humorous sketch of playful jeu d'esprit, such as "X-ing a Paragraph" or "Never Bet the Devil Your Head." All his stories reveal his high regard for technical proficiency and for what he called "rationation."

Poe's fugitive early poems, stories rarely collected (such as "Bon-Bon," "King Pest," "Mystification," and "The Duc De L'Omelette), his only attempt at drama, "Politian"—these and much more are included in this comprehensive collection, presented chronologically to show Poe's development toward Eureka: A Prose Poem, his culminating vision of an indeterminate universe, printed here for the first time as Poe revised it and intended it should stand.

A special feature of this volume is the care taken to select an authoritative text of each work. The printing and publishing history of every item has been investigated in order to choose a version that incorporates all of Poe's own revisions without reproducing the errors or changes introduced by later editors. Here, then, is one of America's and the world's most disturbing, powerful, and inventive writers published in "the first truly dependable collection of Poe's poetry and tales."

LIBRARY OF AMERICA is an independent nonprofit cultural organization founded in 1979 to preserve our nation’s literary heritage by publishing, and keeping permanently in print, America’s best and most significant writing. The Library of America series includes more than 300 volumes to date, authoritative editions that average 1,000 pages in length, feature cloth covers, sewn bindings, and ribbon markers, and are printed on premium acid-free paper that will last for centuries.
Read throughout the world, translated by Baudelaire, and admired by writers as different as Dostoevsky and H. G. Wells, Edgar Allan Poe (1809-1849) has become a legendary figure, representing the artist as obsessed outcast and romantic failure. His nightmarish visions, shaped by cool artistic calculation, reveal some of the dark possibilities of human experience. But his enormous popularity and his continuing influence on literature depend less on legend or vision than on his stylistic accomplishments as a writer.

Patrick Quinn (1918-1999), the editor of this volume, was Professor of English at Wellesley College and the author of The French Face of Edgar Allan Poe, among other works.