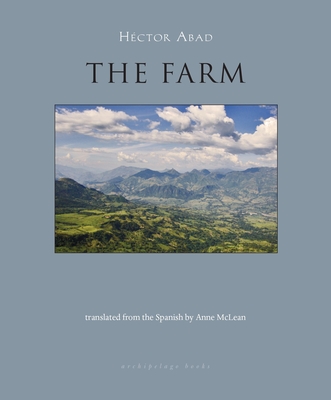 By Hector Abad, Anne McLean (Translated by)
$20.00
On Our Shelves Now

Closely knit Colombian siblings' internal rifts threaten to tear apart the hard-won legacy their father fought to establish against guerilla and paramilitary violence. An intimate and transgressive novel that confirms Héctor Abad as one of the great writers of Latin American literature today.

Pilar, Eva, and Antonio Ángel are the last heirs of La Oculta, a farm hidden in the mountains of Colombia. The land has survived several generations. It is the landscape of their happiest memories but it is also where they have had to face the siege of violence and terror, restlessness and flight.

In The Farm, Héctor Abad illuminates the vicissitudes of a family and of a people, as well as of the voices of these three siblings, recounting their loves, fears, desires, and hopes, all against a dazzling backdrop. We enter their lives at the moment when they are about to lose the paradise on which they built their dreams and their reality.

*  Héctor Abad is one of Colombia's leading writers. Born in 1958, he grew up in Medellín, where he studied medicine, philosophy, and journalism. After being expelled from university for writing a defamatory text against the Pope, he moved to Italy before returning to his homeland in 1987. Abad has worked as a lecturer in Spanish at the University of Verona and as a translator of Italian literature. His translations from the Italian include works by Giuseppe Tomasi di Lampedusa and Umberto Eco. Abad writes a weekly column for Columbia's national newspaper El Spectador. His memoir, Oblivion (Farrar, Straus & Giroux, 2013), was met with widespread critical acclaim. His novel La oculta (The Farm) won the 2015 Cálamo Prize in Spain and was shortlisted for the Mario Vargas Llosa Prize.
*  About the Translator: Anne McLean has translated works by Javier Cercas, Evelio Rosero, Juan Gabriel Vázquez, Ignacio Martinez de Pisón, Carmen Martín Gaite, Enrique Vila-Matas, and Héctor Abad, as well as Autonauts of the Cosmoroute, Diary of Andrés Fava, and From the Observatory by Julio Cortázar (Archipelago). In 2012 she was awarded the Cruz de Oficial of the Order of Civil Merit in 2012 in recognition of her contribution to making Spanish literature known to a wider public. <

One of Financial Times' Best books of 2018: Fiction in translation
Longlisted for the 2020 International Dublin Literary Award

"Building on his well-received memoir, Oblivion...the Colombian writer Abad tells a family story in The Farm, a novel that deploys the tragic events of his country’s history as background...Pilar stands out for her delicate and memorable turns of phrase." —Patricio Pron, The New York Times Book Review

"The Farm is a sweeping, satisfying tale about the interplay of family life and national history...The novel’s three main characters share the narrative duties, and each is a memorable, distinct figure...With perceptive novels like this one, Abad is carving out an enviable niche in Colombia’s celebrated literary tradition."  —Kevin Canfield, World Literature Today

"[A] pensive novel, by noted Colombian writer Abad... of a rural family torn by conflict and incomprehension.... Abad studs his novel with sharply drawn aperçus... A graceful story that takes its time to unfold, with much roiling under the surface of the narrative." —Kirkus Reviews

"Abad’s arresting novel (after the memoir Oblivion) tells the story of La Oculta, a farm hidden in the mountains outside Medellín that has weathered guerilla and paramilitary violence but whose future is anything but secure...a brilliant lesson in Colombian history, as it fluctuates between past, “nonexistent future, which is over for us or ending,” and “the present, the here and now, in these few moments of life left to us.”" — Publishers Weekly

"Abad beautifully intertwines three distinct personalities against the backdrop of La Oculta... His descriptions of the land make the reader fall in love with the place... When conflict arises among the siblings and La Oculta is threatened, readers viscerally share in the pain they experience as the story reaches its moving conclusion."" — Shelf Awareness

"As the personal and family histories build and intertwine, each narrators’ words nourish and thrive off the others. Each of us will find something personal or familiar or profound to identify with in one of the three characters." — Catherine Belshaw, Asymptote Journal

"Mirrored so as to reflect one another, the glossy, dark, and quiet rings form and swirl out as if produced by a pebble thrown into the farm's deep nameless lake...Abad's skill in The Farm, and a reason he is one of Columbia's most magnetic writers, is the capacity to embody the pebble, positioning himself in the center of rippling circles in order to appreciate the force from every surrounding point." —Nathaniel Popkin, Rain Taxi Review

"Colombia’s twenty-first century rejoinder to One Hundred Years of Solitude. ... There can be no future, Abad seems to be arguing, when everything you are is hidden away in a time you can never fully know." — Lucas Spiro, Artsfuse

"Although the work is presented as a chorus of three voices, those of the siblings who narrate the events for us, this trio blends into one voice, that of the author, who becomes the ventriloquist for The Farm, the true protagonist...Héctor Abad Faciolince invites readers to discover what this book conceals or reveals in its chorus of three siblings’ voices as they alternate like soloists, speaking of the true protagonist of the story, a rural farm that could imprison or liberate, lock or unlock, depending on the lens through which it is viewed." —Dixon Acosta Medellín, El Espectador

"[The Farm] is a tale you don’t wish to end. . .  told with love of the memories the country holds, fury at those who ravaged it and sorrow at everything that has been lost. This richly evocative saga is so persuasively alluring, it suggests the greatest of these is love." —Rosemary Goring, Herald Scotland

“At the center of Abad’s sprawling novel is an archetypal scenario: three grown siblings wrestling with what to do when they inherit their family’s farm upon the death of their mother... The overall effect creates a fantastic sense of the place described, while also illuminating the way that gaps in knowledge can shape who we are today." —Tobias Carrol, Words Without Borders

"Abad’s prose shines with the dreams of the Antioquian settlers who attempted to create a utopia for their descendants. But the novel also casts shadows—nightmares taking the form of guerrilla kidnappings, threats and massacres of the paramilitaries, and the ghosts of all who have drowned at La Oculta lake. The Angél siblings recount, assess, and cross-reference these events into a comprehensive portrait of their family, revealing how a land’s history can bind or divide our families, while always calling us to return home." —The Arkansas International

"From Colombia, fifty years after the magic realism of One Hundred Years of Solitude, comes Hector Abad’s THE FARM, a superbly-written novel of equal magnitude, but entirely realistic. The government land turns out to be worthless, untamed wilderness that produces only snakes, jaguars and mosquitos. Abad’s brave, stubborn ancestors turn it into an empire. Meet the three siblings of the Angel family, who take turns telling the story: Pilar, who has only loved her husband Alberto her whole life; beautiful Eva, married three times, remembering the night she escaped being murdered by a band of paramilitary thugs, and Antonio, gay violinist living in New York with his black husband, researching the very history you are reading about their ancient family farm." — Nick DiMartino

"Mr. Abad's prose is elastic and alive . . . In Spanish the verb 'to remember' is 'recordar,' the author reminds us, a word that derives from 'cor,' the Latin for heart. This memoir is extravagantly big-hearted. It will be stocked, in good bookstores, in the nonfiction or belles-lettres sections. A wise owner might also place a copy under the sign that more simply reads: Parenting." -Dwight Garner, The New York Times

"[An] admirable effort at speaking the unspeakable, at verbalizing the pain accumulated over decades, is Héctor Abad's extraordinary memoir Oblivion. It's been years since I read such a powerful meditation on loss . . . [Abad's] desire to explore the echoes of memory with meticulous care, to touch the wound of the past through lucid prose, is an act of valor." -Ilan Stavans, San Francisco Chronicle

"A tremendous and necessary book, devastatingly courageous and honest. At times I wondered how [Abad] was brave enough to write it." -Javier Cercas