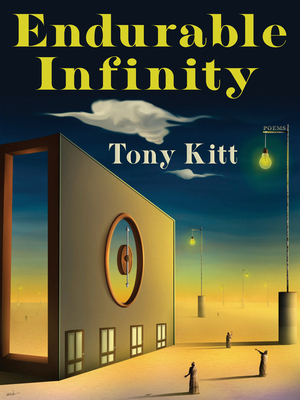 In Endurable Infinity, Tony Kitt creates his own tangential surrealism through wonder, intuition, and surprising connections. If the original surrealists of the 1930s sought to unleash the unconscious mind by bringing elements of dreams to the waking world with jarring juxtapositions, Kitt’s poetry is more about transmutation, or leaps, from word to word and phrase to phrase. He takes American poet Charles Borkhuis’s statement that contemporary surrealist poets write “from inside language” as a challenge and a call to action.

Tony Kitt lives in Dublin, Ireland. His poetry chapbook The Magic Phlute was published by SurVision Books in 2019. He edited the anthology Invasion: Ukrainian Poems about the War (SurVision Books, 2022).
His poems have been translated into Italian and Romanian and appear in Oxford Poetry, the North, Plume, Poetry Ireland Review, the Prague Revue, Cyphers, Under the Radar, the American Journal of Poetry, Stride, and other journals and anthologies.

“Tony Kitt’s Endurable Infinity is a pyrotechnic display of delirious volcanic eruptions that illuminate the surreal underbelly of words. His dazzling bursts of imagery take us from the outside looking in to the inside looking out in the way ‘A magician pulls you from a hat.’ Kitt’s sharp, satirical juxtapositions grow eyes on trees, signaling to us like ‘dollar-sign smoke rings from Magritte’s pipe.’ The brilliant barbs of insight buried in these quick lines pay impressive dividends upon a close reading.” —Charles Borkhuis, author of Dead Ringer

“Tony Kitt at once renews and preserves the spirit of surrealist poetry. His sense of wonder is cast in the colors of film noir. This poet does not fear to introduce sly ironies into the very cusp of verbal revelation, starting with the book’s title Endurable Infinity. As bravely as Lautréamont and Artaud, Kitt discovers the monstrous inside the marvelous, ‘an abyss inside the abyss.’ Here is language that lies awake on the nightside of existence.” —Andrew Joron, author of The Absolute Letter

“‘Has anybody flown / to holiness from a language?’ asks Tony Kitt in his remarkable new book, Endurable Infinity. An heir to the Bretonian impulse of ‘the marvelous,’ Kitt electrifies impulses both human and galactic. Sometimes socially conscious, his stunning poems avoid expected diatribes, unfolding into complexities of what could be: ‘Don’t bigfish me. / Open your Michelangelo mouth.’ He offers an uneasy wisdom (‘Loving is living your life backwards’) that simultaneously dismantles language: ‘You forgave me / for what you were going to do to me.’ Kitt asks us to undo ourselves (‘Is there a hunter fond of unhunting?’) in the reconstitution of the possible.” —George Kalamaras, poet laureate emeritus of Indiana, and author of Through the Silk-Heavy Rains

“Words are nerves. This is abundantly evident in the language Tony Kitt has deployed to animate and accelerate a poetry of vigor, synaptic flux, and imaginative force. This is the language of chimeras, fabulous creatures and fulgent metaphors, ‘rain rivers,’ ‘spiderflowers,’ and ‘trainsnakes. . . dispatched down the veins of the impossible.’ It is the mad pain of love and desire inflicted by the very taste of existence. The blaze between neurons. The spark between words.” —John Olson, author of Dada Budapest