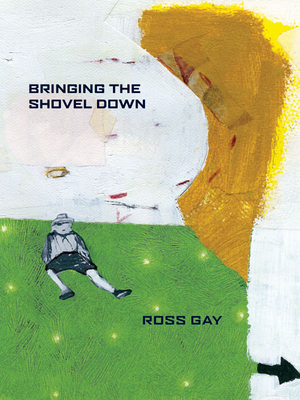 Bringing the Shovel Down is a re-imagination of the violent mythologies of state and power.

Ross Gay is assistant professor of English at Indiana University and author of the poetry collection Against Which.  His poems have appeared in American Poetry Review, Gulf Coast, Margie: The American Journal of Poetry, Ploughshares, and Sou’wester, among other publications. Gay also teaches in the low-residency MFA program at Drew University and is a Cave Canem fellow.

“Gay . . . can score a direct hit when he wants to. In ‘Bringing the Shovel Down,’ he employs a variety of voices. The most effective of these . . . is the voice in which Gay shears off the ‘poetic’ trappings and just lets his launguage ‘stutter and thrum,” and he puts it in a poem called ‘Say It.’ Yes, you think: say it. He’s at his best when he comes right out with it.”
—New York Times

“These poems speak out of a global consciousness as well as an individual wisdom that is bright with pity, terror, and rage, and which asks the reader to realize that she is not alone—that the grief he carries is not just his own. Gay is a poet of conscience, who echoes Tomas Tranströmer's ‘We do not surrender. But want peace.’”
—Jean Valentine

“Ross Gay is some kind of brilliant latter-day troubadour whose poetry is shaped not only by yearning but also play and scrutiny, melancholy and intensity. I might be shocked by the bold, persistent love throughout Bringing the Shovel Down if I wasn’t so wooed and transformed by it.”
—Terrance Hayes

“With masterful rhythms and multiple tones, Ross Gay gets down to bare-bones difficulty: love often tinged with grief, violence, and deception. He moves from macrocosm to microcosm, probing injustice’s absurdities as well as a pining self that can’t be pinned down. As with his ‘little dreamer, little hard hat, little heartbeat,’ Gay’s poems are vitalized by the poet’s ache for compassion and truth.”
—Ira Sadoff

“With language wholly his own, sparkling clean and tender, ‘Bringing the Shovel Down’ exposes a dark marriage of love and violence from which one cannot turn away.”
—ForeWord Magazine

“Gay’s language and imagery are exquisite.”